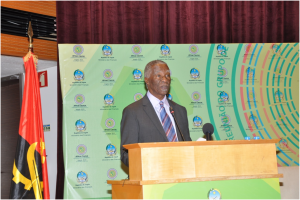 LUANDA, Angola, September 3, 2015/ – The continent of Africa loses over 50 thousand million dollars each year as a result of the illicit flow of funds, former president of South Africa Thabo Mbeki told the meeting of the Group of African Governors affiliated with the World Bank and the International Monetary Fund, known as the African Caucus.

“Africa faces the great challenge of large volumes of capital leaving the continent illicitly â€“ money that our continent needs to address the challenges of development. We, as Africans, have an absolute obligation to act on this to ensure that the rest of the world (the destination of these illicit movements of funds), by acting together, will help stop this drain of resources which belong to the continent that needs them so badly,” said Thabo Mbeki.

Mbeki is now head of the High-Level Panel on Illicit Financial Flows From Africa created by the United Nations Economic Commission for Africa and the African Union, which did exemplary work and analysed the magnitude of the problem on the continent, producing a report now known as the “Mbeki Report”.

The former President of South Africa maintains that it is possible to put an end to these issues with proper monitoring of the transactions of large commercial companies. Moreover, he points out that in order to combat this phenomenon interventions are needed from institutions such as tax authorities, customs, central banks, financial intelligence units for combating money laundering, audit and anti-corruption authorities and the police.

It is clear to Thabo Mbeki that there is also a need for appropriate legislation to give these institutions the mandate they need to cooperate in the fight against illicit capital outflows and so that countries can also cooperate at the regional level, given that some of these outflows move across shared borders.

“Our governments lose large amounts of revenue owed to the state due to the unlawful outflow of significant capital that we need for development,” he pointed out.

Thabo Mbeki says that it is imperative to build the global architecture required for a focussed offensive to put an end to these illicit outflows, within the framework of UN processes, in order to avoid a piecemeal approach to the problem and to enable supervision by an appropriate UN body.