Tendai Huchu and Bryony Rheam are set to take part in debates at Africa Utopia. Back for a third year Africa Utopia celebrates the arts and culture of the African continent. 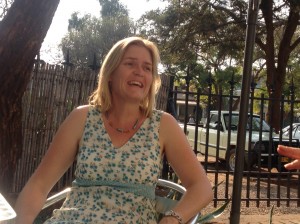 The festival looks at how Africa can lead the way in thinking about culture, community, business and technology and includes topics ranging from fashion, gender and power in politics, sustainability and activism. The 2015 edition of the festival features some of Africa’s greatest artists across music, dance, literature and the arts, including Baaba Maal, Spoek Mathambo, Tosin Coker, Irenosen Okojie, Tony Allen, Toumani and Sidiki DiabatÃ©, Orchestra Baobab, KassÃ© Mady DiabatÃ©, Chineke! and Chi-chi Nwanoku.

The festival will be held between Friday 11 September to Sunday 13 September at the Southbank Centre in London. Tendai Huchu is due to take part in a panel on 12 September about ‘African Male Identity’, exploring the truths and myths of African masculinities, identities, sexualities, fatherhood and friendship. His second novel The Maestro, The Magistrate & The Mathematician has recently been published by amaBooks in Zimbabwe and by Parthian Books in the United Kingdom, and will soon be published in Nigeria, North America and Germany.

Joining Tendai at the festival will be Bulawayo-based writer, Bryony Rheam, who is a panellist the following day – Sunday September 13. The panel of which she is a member, will be looking at how genre fiction is changing the narrative of African fiction. Pulp and genre fiction include: sci’fi, horror, crime, erotica, utopia and historical fiction. Following on her first novel, This September Sun, Bryony has just finished writing her second novel, which is a murder mystery set in Bulawayo. This panel is chaired by Zimbabwean editor and literary critic, Ellah Allfrey.

During her visit to the UK Bryony will spend several days in Torquay, where she will receive her prize for being a winner of the Write Your Own Christie writing competition, which celebrates the work of one of the world’s best-selling novelists, Agatha Christie.

The competition involved writers from around the world writing a collaborative novel, starting with the opening of Christie’s A Murder is Announced. Each month, writers were asked to submit the next chapter of the story. The judges then selected the winner for that particular month, and the competition, and the novel, then evolved over a nine month period. Bryony was runner-up for chapter seven, and winner for chapter eight, the judges commenting about her winning entry: ‘It was a confident chapter with a terrific ending, as well as a carefully plotted solution.’

Bryony’s prize is one night’s accommodation at the Grand Hotel in Torquay, where Agatha Christie spent her honeymoon with her first husband. That evening, there will be a dinner at Christie’s house, Greenway, now a National Trust property, also attended by the other prize-winners.Â Before the dinner, there will be a tour of the house, which is now a National Trust property. At the dinner will also be Christie’s grandson, Matthew Pritchard, and her British and American publishers at HarperCollins.Â  Agatha Christie was born in 1890, so this year is the 125th anniversary of her birth and there is a special celebration in Torquay where the annual Agatha Christie Festival is held.

As a great fan of Christie’s, Bryony is thrilled to be among the prize-winners. References to Agatha Christie can be found in This September Sun. The character of the grandmother in the novel is also passionate about Christie’s work and her intricate plots.