Three-time Mr Zimbabwe Champion Chienderamwano is to go on a one-year sabbatical that will prevent him from defending his top bodybuilding title in 2016. 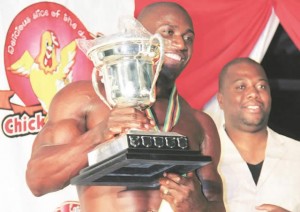 Although the Botswana-based but KweKwe born bodybuilder said he was going on a one-year break, he indirectly hinted that he may be retiring. â€œI want to quit when I am on top. I donâ€™t want to leave when I will be losing. I want to leave a legacy,â€ said Chienderamwano, who has won the Mr Zimbabwe title for the past three years in 2013, 2014, and 2015.

In September, he won the Mr Ironman contest, having also won the Zimbabwean version of the Mr Musclemania in 2014. â€œI no longer have anything to prove,â€ said Chenderamwano.

The non-availability of Chienderamwano would be a big blow to Zimbabwean bodybuilding, as he had become a colourful figure with many followers in the countryâ€™s bodybuilding circles.

He had also become a strong competitor to the likes of Isaac â€˜Sugarâ€™ Chimuchenga, Vincent Kandiero, Partson Chatedzuka, Zumailer Eusen Meman, Givemore Marume and Eddie Marondera. He had also helped improve the standards of the sport in the country.
After winning the 2016 title ahead of crowd favourite Chimuchenga, Chienderamwano dismissed accusations made at the judges – that they were biased towards him.

â€œI donâ€™t listen to people who say that the judges were biased. I am just used to winning and the moment you do that, people become jealous,â€ he said.

South African-based Regina Jonga won the 2016 Miss Zimbabwe title but unlike Chienderamwano, she said she would be returning to Zimbabwe next year to defend her title.

â€œI am the happiest person on earth today,â€ she said, â€œI will be coming back to defend my title next year and will participate for many more years to come.â€

Bodybuilding is one of the fastest growing sporting disciplines in Zimbabwe and commands not only a large spectator value, but also enjoys a commendable corporate support.