Ronald Muchatuta, a Zimbabwean-born contemporary artist currently residing in Cape Town, South Africa has been invited to exhibit â€‹one of â€‹his â€‹latest series of paintings titled "The Owners of the Lake" at the African Art Fair 2015 in Paris from Thursday, 15 October - Sunday, 18 October. â€‹ 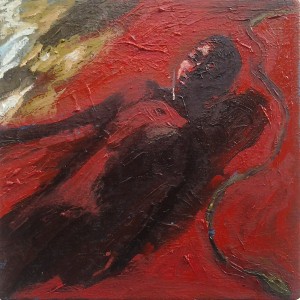 The theme for the series of paintings was inspired by the African superstitions that are deeply embedded within the folklores.

The urban myths that have been passed on from one generation to another through oral storytelling have been created to preserve the African tradition which acts as the guiding force for Africans.

â€œAll the riveting stories I heard about mermaids and the underworld while growing up evoked a sense of curiosity which later resulted in this body of work. The mermaid in my paintings is known as Njuzu, a mythical creature familiar in the Karanga Shamanism, a southern region of Zimbabwe. This creature is usually portrayed with a female head, the upper torso of a human and the bottom half is fish shaped. Njuzu also has pale skin and is strikingly beautiful. As an African, superstition has always been part of my everyday life,â€ explains Muchatuta.

Muchatutaâ€™s artwork depicts a deep spiritual state of consciousness that reveals what transpires in the underwater world. Through his conceptual thought process, Muchatuta enables the viewer to engage with the narrative of a sacred African Mythology. The creature is considered to be sacred and can be found amongst lakes and deep rivers in the south of Zimbabwe however, they become exposed when one enters in the spiritual realm as part of a Shamanic journey.

â€‹â€œIt’s a great honour to be selected as one of the artists participating in the African Art Fair to share my artwork with the French communityâ€, exclaims Muchatuta. The African Art Fair was created to develop relationships between different cultural actors and economic decision makers – artists, galleries and many businesses.

This gives artists an opportunity to connect with potential sponsors and buyers. The event aims to give artistsâ€‹ â€‹and organizations a platform to educate visitors and to make African art culture accessible to all whilst enabling emerging artists to share their work with the general public and professionals.