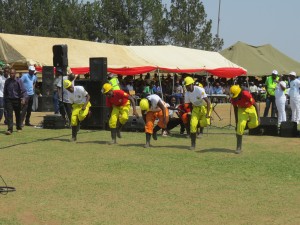 The scoccer ground, which holds about 20 000 people, was overflowing with a crowd of mainly Zanu PF supporters clad in political party regalia.

The young theatre performers, who showcased their talents at the commemorative show, thoroughly entertained the audience, including Jorum Gumbo and Vice President Emmerson Munangagwa.

Although over eight different dance groups, representing all districts in the Midlands province gave their best. But Sunduza outshone them all, judging from the audienceâ€™s wild response. Dressed in distinctly different traditional attire, the dance troupe performed their polished Gumboot dances and Accapella (Imbube) songs.

Speaking on the sidelines of the event Sunduza Director Charles Banda said he was delighted to be part of the event Celebrating Road Safety Day through rich arts and diverse culture.

â€œRoad accidents cost many lives. Whith such events I am sure that Zimbabwean drivers and people in general will have the capability to avoid unnecessary road accidents, mainly caused by human error,â€ Banda said.

â€œIt was a spectacular show,â€ said the Provincial Sport Arts and Culture officer Anele Gumbochuma, adding that he would have loved to see more local artists accommodated in such programmes.