So many men want to compete in Zimbabwe's infamous Mr Ugly competition that the organisers are being forced to hold three semi-finals, the private Newsday reported on Wednesday. 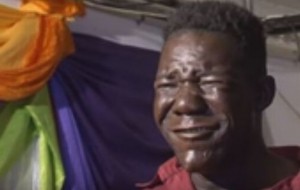 The winner in the last two contests was William Masvinu, a market porter whose face has now become something of a brand.

Less than two months ago, it was reported that just 13 people had registered to take part in the competition to crown Zimbabwe’s most aesthetically-challenged man.

But now there are 36 would-be Mr Uglies, forcing the organisers into the happy position of having to whittle down the competitors before they can stage the much-awaited finals, Newsday reports.

“We were left with no choice but to conduct semi-finals so that we can have a small number for the finals,” the paper quoted David Machowa as saying.

In a country where beauty pageants are common, Machowa organises what has arguably become the best known of them all.

Mr Ugly was set up in 2011 and has been held in the capital three times since.

The winner in the last two contests was William Masvinu, a market porter whose face has now become something of a brand. Masvinu, 41, says his looks are a gift from God.

He has appeared in an advert and a local drama since first winning the contest in 2012. However he’s also complained that he has not made as much money from his fame as he had hoped.

He is reported to be competing again this year, though the organisers have warned he faces a “tough contest”.
The Mr Ugly competition was not held in Harare last year. In 2012 there were just 13 participants.
There have been rival Mr Ugly contests, including one held in Beitbridge in southern Zimbabwe, sparking quarrels over who developed the concept first.

The finals of the 2015 contest take place onÂ November 20Â in Harare.