THE second suspect arrested in connection with the attack on two couples at the Rhodes Park in Kensington last month was due to take part in an identity parade. The 20-year-old Zimbabwean national appeared in the Johannesburg Magistrate’s Court on Thursday morning after being arrested in Yeoville two days earlier. His case was postponed to 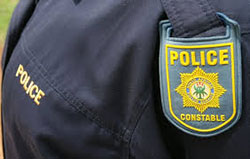 THE second suspect arrested in connection with the attack on two couples at the Rhodes Park in Kensington last month was due to take part in an identity parade.

The 20-year-old Zimbabwean national appeared in the Johannesburg Magistrate’s Court on Thursday morning after being arrested in Yeoville two days earlier. His case was postponed to November 19.

Dressed in a blue and yellow T-shirt, brown pants and All Star sneakers, the man wore a confused look as he stood in the dock following the proceedings.

Before he had appeared in court, a court orderly went downstairs to the cells where his name was called numerous times.

He only surfaced up the court stairs a short while later. He stood in the dock, his hair scruffy and uncombed, looking at the ceiling and around the court gallery.

Following the court proceedings through an isiZulu interpreter, he indicated he wanted to apply for legal aid and possibly bail.

Magistrate Lucas van der Schyff told the accused he faced a serious offence and if found guilty, could face life imprisonment. He said it would not be easy for him to get bail, but advised him to gather his paperwork proving he was in the country legally as well as evidence of his fixed address.

This was the second arrest made in connection with the attack on the two couples where both men were drowned and one woman raped.

Both men face a charge of murder and rape.

They were alleged to have been part of a dozen-strong gang who attacked the two couples who had gone to the park after a church service.

The gang allegedly accosted the couples; beat the two men; stripped them and tied their hands and feet with their clothes before throwing them into the lake where they drowned.

One of the women was allegedly raped while the other escaped without any physical harm.

The second accused in the matter, a 24-year-old man, would appear in court on November 24.