Zanu PF says it has raised well over the $3 million it wanted for its conference at Victoria Falls. Apart from $5 contributions extorted from civil servants and rather larger ones from companies, most of this money will come, in reality, from state coffers. 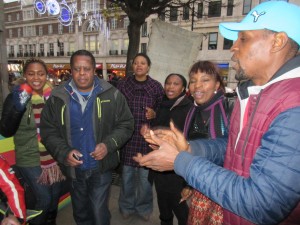 Our galaxy of parastatals â€“ driven into bankruptcy by Zanu PF looting â€“ paid up to $100,000 each for a boastful table at dinners in Harare and Bulawayo held to raise funds for the conference.

As the economist Dale Dore observes, the Zanu PF regime is fond of â€˜alternative and innovative financing arrangementsâ€™. In this case it is the â€˜special purpose vehicleâ€™ created by Finance Minister Chinamasa in last monthâ€™s budget to warehouse bad debts accumulated by mismanaged state enterprises.

This arrangement conveniently allows parastatals to pay millions of dollars to sponsor party political Zanu PF fundraisers and all the debt will be passed on to the state (which is supposed to regard the debt as an asset!).

Â The Vigil thinks this is rather like the witchcraft apparently practised by the former Education Minister and Mashonaland East Governor Cde Aeneas Chigwedere, who is being sued by his son Magwiza for unleashing goblins to terrorise the family.

The Herald reports that the former minister is alleged to have gathered the whole clan at his residence, filled a dish with porridge concocted with herbs and made them drop blood from their punctured little fingers into this brew before forcing them to eat it using the bleeding finger (see: http://www.herald.co.zw/witchcraft-lawsuit-for-ex-minister/).

Dr Goblin continued â€˜this shows that they donâ€™t have the people at heart. They want us to be beggars for the rest of our lives. They bring their food handouts that donâ€™t last long and they up their game just before elections to try and convince the people to turn their backs against the Government. We donâ€™t want their food.â€™

The Herald says Dr Goblin was addressing thousands of people at a rally in Matabeleland South at which she handed out food and hailed the â€˜mega dealsâ€™ signed with China which she proudly pointed out would include funding for the construction of a bigger parliament near Harare and a new warehouse (probably to store government debt).

Itâ€™s goblin economics for sure.

Dr Goblin makes politics out of the starvation in Matabeleland.Â  But we at the Vigil know how desperate the situation there is. Some of us financially support a pastor working in the Bulawayo area. This is part of his latest report: Â â€˜I greet you all in the name of the Lord Jesus! At present everyday life is difficult in Zimbabwe, for instance the sick can’t go to hospital, and when they do, there are no medicines there. Many times I have driven people 20 km out of town to a clinic where people can get their medicines free. Some of these people cannot even walk, we have to carry them on stretchers. Just yesterday I took a young man, John, to the Bulawayo hospital. He broke his leg in August and it has been replastered three times. Now they say he has to have pins but they can only do it in January. He was discharged without painkillers. Many children are no longer going to school, especially in town.Â  Parents cannot find the money for school fees. In the rural areas people are constantly complaining of headaches. The reason for this is that they have not eaten. The rain has not come but people are still preparing their lands in hope. Some do not have seed to plant; they have eaten it.â€™