Ronald Muchatuta, a Cape Town based contemporary artist has created a collection of paintings titled â€œThe African Immigration Seriesâ€ which deals with the issues of immigration and xenophobia; a familiar topic to the Zimbabwean-born artist. The series is part of the Aesthetically Vogue group exhibition at Eclectica Design & Art in Cape Town which will be showcased until 31 January 2016. As South Africans prepare to commemorate Reconciliation Day on 16 December 2015, Muchatutaâ€™s artwork is a great reminder that we need to continue striving for national unity. The intention of the public holiday is to encourage the reconciliation between different racial groups. 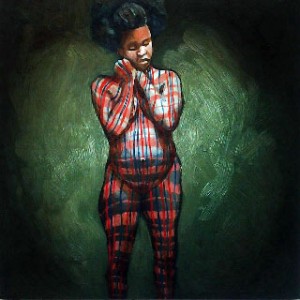 â€œâ€The African Immigration Seriesâ€ is an ongoing body of work paying homage to the African migrants who were brutally killed earlier this year during the xenophobic attacks. African migration has taken its toll on black people affected by war and economic pressures Â and is currently a pressing issue – from the recent Xenophobic attacks that happened in South Africa to the Nigerian women practising prostitution in the forests of Italy. I created this series to remind South Africans about the ugly truth of intolerance. The intention is to start a conversation as we observe Reconciliation day about how we are going to move forward peacefully and make sure such atrocities to humankind never happen again,â€ comments Muchatuta.

Muchatuta uses the red, blue and white pattern from the China bag which is also referred to Â as ‘Zimbabwe must goâ€™. The China bag is made from large woven plastic bags and commonly used to carry belongings while migrating across the border – thus a symbolism of the African immigrants in his artwork. The bags have different names throughout the continent for example, in Zimbabwe they are called ‘ Mbare bag ‘ due to the accessibility in market places and in Nigeria, they are called ‘Ghana must go ‘. In Johannesburg they are called ‘Shangani Bag ‘ due to the Shangani people migrating to Johannesburg.

The paintings portray intense symbolism and the brutality involved during xenophobic attacks, such as the figures with rubber tires around their necks. This is known as Necklacing, the practice of summary execution and torture carried out by forcing a rubber tire, filled with gasoline, around a victim’s chest and arms, and setting it on fire.

â€œThe humiliation that happens within the African continent and beyond has inspired me to elaborate and define the emotional connection I have with the victims of migration. Whether the victims are legal or illegal the sting of being labelled as an â€˜Alienâ€™ in a place of non-origin affects many on a global scale. Migrancy is an issue that I choose to venture and engage with on a regular basis,â€ explains Â Muchatuta. Art enthusiasts can view a few paintings from the immigration series at Eclectica Design & Art, Cape Town until 31 January 2016.