The number of rhinos killed by poachers in Zimbabwe spiked to 164 in 2008. In 2014, poachers killed 15 rhinos in Zimbabweâ€”including five black rhinos in Save Valley and one white rhino in Bubye Valley. 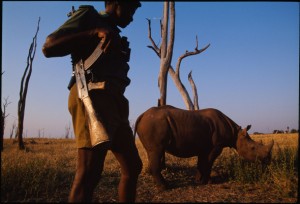 This year, fewer than ten have been killed for their horns, sold illegally in Vietnam and other Asian countries for their imagined medicinal and other powers.

Zimbabweâ€™s rhino population, estimated at 766 in 2014, is the continentâ€™s fourth largest after South Africa, Kenya, and Namibia. (Some 2,200 rhinos roamed Zimbabwe in 1999.)

The dramatic reduction in the killings is because 90 percent of the countryâ€™s rhinos have been removed from high-risk poaching areas to Intensive Conservation Zones, says Johnny Rodriguez , chairman of the Zimbabwe Conservation Task Force. These secure zones are essentially protected breeding areas in selected game reserves.

Conservation groups, alarmed about the decimation of the countryâ€™s rhinos, stepped up the relocation of the surviving animals from high-risk poaching areas to safe zones.

Fatalities dropped from 66 in 2012 to 20 in 2013 and only six in 2014. Eight rhinos have been poached since January 2015â€”far fewer than the new births recorded at the countryâ€™s main breeding centers, in Save and Bubye Valley Conservancies.

Both sanctuaries are run by the Lowveld Rhino Trust (LRT), a local conservation group that now protects 90 percent of Zimbabwean rhinos in partnership with the U.S.-based International Rhino Fund (IRF).

In a recent statement, the IRF said the lowveld rhino program owes its success to translocation, tracking, monitoring and anti-poaching efforts, as well as the treatment and rehabilitation of rhinos.

According to the IRF, 100 rhinos had been born in Bubye Valley Conservancy by 2012, and the birth rate has been growing at 5 to 10 percent a year since then. In 2012, 82 black rhinos were introduced into the protected breeding area, and at least 100 more births are expected by 2020.

Itâ€™s a similarly positive story in the Motobo breeding area. Last year was the first in the past 15 that no rhinos were poached there, says James Burton, chairman of the Matobo Rhino Protection Initiative. â€œAs a result, an increased rhino birth rate has been recorded in the last two years.â€

And at Hwange National Park, where poachers have killed 62 elephants with cyanide poisoning in recent months, rhino poaching is declining.

â€œThe poaching of both the black and white rhino species has remained low within the parkâ€™s estate,â€ says Caroline Washayo-Moyo, spokeswoman for the Parks and Wildlife Management Authority. But, she added, thereâ€™s been an increase outside the park.

Protecting the rhinos inside Hwange is crucial because the park now holds only ten, down from 90 a decade ago, according to the Victoria Falls-based rhino conservation group Bhejane Trust.

Trevor Lane, the trustâ€™s cofounder, says that the Sinamatella Intensive Protection Zone in Hwange has kept the remaining rhinos safe.

â€œWe now have a permanent monitoring team on the ground in Sinamatella, comprising the Bhejane Trust team leader and selected, dedicated parks rangers,â€ Lane says. â€œThis team is in the field at all times, checking for illegal activity and collecting data on the remaining rhino to establish the status and viability of the population.â€

The trust has proposed setting up two Rhino Conservation Areas, one in Sinamatella and another in Zambezi National Park, at Victoria Falls, Lane says. The Sinamatella area would be stocked with animals from the surrounding lands, while the Zambezi area would primariy be dedicated to fundraising and education.

Meanwhile, transferring rhinos from Zimbabwe to Botswanaâ€”a safe haven for wildlifeâ€”has yielded benefits. In June, a calf was born to one of the eight black rhinos moved to Moremi Game Reserve. And under a bilaterial agreement signed in May 2011, 12 more rhinos will be have yet to be rrelocated to the Okavango Delta.

If Zimbabwe continues to focus on protecting its rhinos, thereâ€™s reason to believe that its target population of 550 black rhinos and 370 white rhinos by 2016 is within reach.

Oscar Nkala is a Zimbabwean journalist based in Gaborone, Botswana. He specializes in African defense and aerospace news in addition to investigations of poaching crimes in southern Africa. He is featured as an investigator and consultant in the award-winning film When Giants Fall, by Matriarch Films.