A MEMBER of the Central Intelligence Organization (CIO) is part of a five-gang poaching syndicate which gunned down four black rhinoceros in the Sango Valley Conservancy, de-horning them before selling the horns to Zambian buyers. 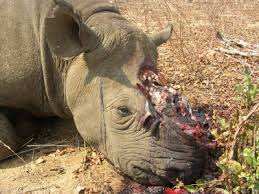 The spy Mudenge Munashe Mugwira, Jason Chisango (ages not given) and Tavengwa Machona, 39, have since been arrested and are being trialled separately at the Masvingo Magistrate’s court.

Two other accomplices, Dumisani Moyo and Chris Kombayi, are still at large.

Muchona, the first to stand trial, was last Friday slapped with a 35-year jail term when he appeared before Magistrate Langton Ndokera for contravening section 45(1) (a) of the parks and wildlife Act while the other two are expected to appear in court facing similar charges this week.

However, fifteen years of Muchona’s sentence was suspended on condition he does not commit a similar offence in the next five years. He was also ordered to restitute the value to the dead rhinos to the parks authority.

Prosecutor Tawonga Musina told the court the gang first pounced on Sango Valley conservancy on 10 February 2014 armed with an AK47 rifle and shot down one rhino before de-horning the protected animal.

Court heard that using the same modus operandi, the gang again on 22 February and 19 April last yearÂ killedÂ three more rhinos and de-horned the animalsÂ and shared proceeds of the hunt after selling the horns in Zambia.

The syndicate was busted on 29 December last year in the conservancy while trying another hunt.

After the arrest they confessed to hunting down rhinos and took detectives and parks officials to different places within the conservancy whereÂ carcasses of three rhinos were found.