While small businesses may not generate as much money as larger corporations they equally contribute significantly to a countryâ€™s economy, especially by generating new employment and bringing innovation to the cities in which they are based. 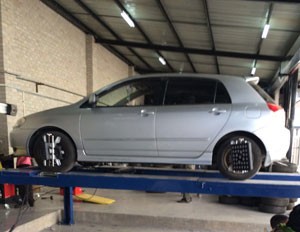 One such case is seen in the way VeeZed Tyres and Alignment Centre, a recently developed business situated in the heart of the city of Bulawayo is contributing to the reincarnation of business life in the city, particularly in the light of a number of companies scaling down on operations or closing shop.

VeeZed Tyres and Alignment Centre which was originally limited to the business of selling tyres has expanded its operations beyond merely selling tyres to offering a range of new services.

These services include 3D alignment for cars, 4 X 4 vans, light trucks and minibuses, specialised vulcanising and tyre mending, computerised wheel balancing for a range of cars, tyre fitting and stripping of run flats, alloy and steel wheel refurbishments and straightening as well as polishing.

These new services are offered at its new, purpose-built premises that provide a spacious and convenient environment for customers.

Originally established in 2009, VeeZed Tyres and Alignment Centre was set up to sell good used tyres imported largely from the United Kingdom.

With the establishment of the new premises the company has decided to increase its business scope thereby offering a direct challenge to existing companies in the city, a scenario that has been described by economists as engendering healthy economic competition, which the city of Bulawayo and the country as a whole, badly yearn for.

Its United Kingdom based owner, Zakhele Mlilo said he was happy to help provide state-of-the-art services to residents of Bulawayo and the surrounding areas as this was a way of improving service provision in the city.

At a personal level, he described the whole venture as his own little way of â€˜giving backâ€™ to the city of Bulawayo.

He said his company would continue to invest in the city through its operations to ensure that Zimbabwe keeps abreast of advancements in the tyre and motoring industry.

â€œApart from VeeZed being a business venture we are also keen on keeping our country abreast with changes in the industry worldwide, especially developments in developed economies such as the UK.

â€œThat is one of the reasons why we decided to go beyond the sale of tyres only,â€ Mr Mlilo said.

Being based in the â€˜diasporaâ€™ Mr Mlilo said he was in a perfect position to bring back expertise in the industry to his home town and at the same time help stimulate economic growth in the city by not only providing employment opportunities but also a much needed service in the transport industry.

The company which currently employs seven people has well-trained and experienced technicians who have the expertise in all types of tyres and the alignment of a range of vehicles. All technicians are trained in South Africa and in the United Kingdom where most of its machinery is imported.

The highly modern and computerised machines that the technicians use ensure clients receive the best possible service.