PRESIDENT Robert Mugabe Saturday came close to yet another embarrassing fall in front of thousands of party supporters who gathered for his 92nd birthday bash at the Great Zimbabwe Monuments in Masvingo. 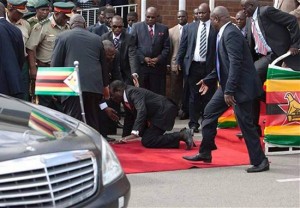 The incident was captured live by ZBC cameras as the veteran leader was being introduced to his former colleagues he was once detained with during the liberation war over three decades ago.

As they were being introduced, the war veterans filed one after the other on the podium to greet a visibly excited Mugabe.

The veteran leader took time to hug his erstwhile colleagues and for a while seemed lost in animated chat with veterans who also looked overwhelmed by his reception.

Then came the moment when Mugabe took a frontwards stumble but immediately straightened his frame in clear embarrassment.

The Zimbabwean leader immediately stopped the hugs as his younger wife, Grace took his left hand and held him closer, allowing him to use his right hand to greet the remainder of his war comrades.

President Mugabe insists he is still fit enough to continue as President.

This is despite growing calls for him to relinquish a job he has resolutely protected for almost four decades.

While Mugabe remains too spirited to continue with his job, his experiences in the past 13 months have shown his frame may be tiring after all.

An embarrassing carpet tumble in front of his supporters at the Harare international airport early last year exposed the once energetic leader as a man who was now walking on a weakening frame.

After the incident, whose images went viral on social media, his defenders were quick to blame the misshape on a â€œpoorly laid carpetâ€.

Mugabe was seen weeks later disembarking from a plane with his bodyguards walking inches close around him and clearly watching each of his steps.

Again, while attending an Africa-India summit in Indian October last year, Mugabe had to rely on his host to keep his balance.

This was after he lost balance and nearly tumbled while walking up the podium to greet Indian Prime Minister Narendra Modi.

An alert Modi immediately stepped forward and extended his hand to hold Mugabeâ€™s before holding him up the podium.