The Hazards and Opportunities book, reflecting on the impacts of the 1991-92 El NiÃ±o drought, had a few things to say about how to boost resilience to drought shocks. Key features included taking account of changing livelihood systems, reducing vulnerabilities through improving assets, and the urgent need for land redistribution, in particular. Commenting on the increasingly challenging livelihoods in the communal areas, the book commented: 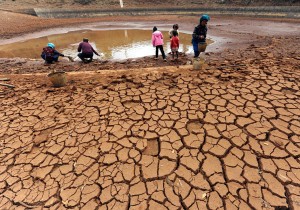 â€œAs production has become more constrained due to declining field areas and reduced land quality and local storage levels have become more limited due to shifts in cropping patterns and greater crop sales, farmers in Chivi are increasingly reliant on off-farm income sources, particularly during drought. In examining drought response policies, the role of local markets, the importance of removing burdening restrictions and the significance of trade and exchange should not be underestimatedâ€¦.

Policies that ensure that markets work effectively and exchange entitlements can be realised are vitalâ€¦.social networks, especially those based on the extended family, remain central to coping strategies in Chivi. Access to remittances, opportunities for food sharing and other linkages appear to be key to survival strategiesâ€¦.

[Yet] the pressures of macro-economic reform were being felt particularly acutely during the 1991-92 drought with high inflation resulting in the reduced buying power of money received from trading, piece work or remittancesâ€¦..[Therefore] external support â€“ from the state, local networks or rural-urban connections â€“ will almost certainly remain key in sustaining livelihoodsâ€¦..

â€¦.The reduction in peopleâ€™ asset levels over time has increased vulnerability and added to the ratchet effect of povertyâ€¦. A more complete understanding of local responses to risk in drought conditions is clearly essential if more effective drought relief, mitigation and proofing strategies are to be designed. Appropriate policies for coping with drought must therefore take the dynamics of local response into accountâ€¦..â€.

Well, much the same could be said 25 years later. But one thing has changed, and that is the distribution of land. In 1996, Hazards and Opportunities commented:

â€œThe pace of resettlement since Independence has been very slow. It has not really had an impact on places like Chivi. Most people resettled from Chivi have been moved to similar drought-prone areas within Masvingo province. Although settlers have larger land areas than they had before, they often do not have sufficient draft power, labour or inputs to invest in ensuring high productivity. The result has been the disappointing performance of most resettlement schemes. The response has been to change the criteria for selection, with more `qualifiedâ€™ farmers now being favoured. However without good soils and reliable rainfall, agricultural production will continue to be a risky enterpriseâ€¦. New models for resettlement are urgently needed that are low cost and flexibleâ€¦

Back then we asked: â€œWhat are the policy alternatives to entering a spiral of poverty and dependency in the communal areas?â€. And the answer, we offered? â€œThere is no better way to reduce rural vulnerability and ensure the viability of peopleâ€™s livelihoods than to increase the productive base. Proofing the system against drought (and other risks) means strategic investmentsâ€¦.

First, addressing the land redistribution with more flexible and imaginative approaches than in the past is a major priorityâ€¦..urgent solutions to the problems of land scarcity will have to be sought in the coming decades. It may now be time to explore a wider range of land redistribution opportunities abandoning the strict adherence to a standardised, packaged settlement model and testing other options. If they are to address the fundamental problems of the communal areas, such options must offer new land of reasonably high potential and in sufficient quantities to begin to satisfy land needs. Such areas must be supported, perhaps through innovative credit schemes, but not constrained by excessive planning and intervention from outside. Settlement areas must have tenure arrangements secure enough to encourage investment. If these conditions are satisfied, evidence suggests that a vibrant small-scale sector can offer Zimbabwe a bright future, both satisfying food needs and entering cash crop production for export. However, if the challenges of land redistribution are not met, then the viability of communal area livelihoods will continue to be undermined with the associated costs of food aid, social disquiet and spontaneous migrationâ€.

It was not until 2000 when Zimbabweâ€™s major land reform took place. It was radical, allowed opportunities in higher potential areas, and was flexible and pragmatic in its implementation. There have been many downsides, but in many respects it responded to the calls we made some years before. But has the land reform increased livelihood resilience and so provided a form of drought proofing, reducing underlying vulnerabilities, and so exposure to drought risks? Is land reform the best form of â€˜social protectionâ€™ offsetting the need for even more humanitarian aid?

The answers are mixed. Certainly having access to land has improved production for most, particularly in the A1 resettlements. It means people have more assets to fall back on, and have a pattern of higher crop production that for grains has meant significantly higher storage levels prior to the drought than anything we encountered in Chivi back in the 1990s. The aggregate statistics of food production, as discussed a couple of weeks ago, are so inaccurate, we really donâ€™t know how much food is circulating through informal markets and sharing networks within the rural areas. My guess is quite a lot. We know that people have moved livestock to the resettlement areas, as discussed in last weekâ€™s bloghttps://zimbabweland.wordpress.com/2013/09/30/irrigating-zimbabwe-time-for-some-new-thinking/. But people are moving too, as households in the resettlements take on relatives from communal area who are in difficulty. This form of â€˜moral economyâ€™ is vital to drought coping, and usually massively underestimated. We have known for years that resettlement households are exporting food both to urban areas and to the communal areas, but this has accelerated during the drought. With remittance levels way down on those in the 1990s, reliance on local production and economies is much higher these days, although off-farm work, including illegal mining, hunting and other activities, is widespread. So at one level land reform has enhanced drought coping options, and offers a buffer of production in the food economy that we still know too little about. The details of this remain obscure, and we are currently collecting data on what is happening across our sample in Masvingo to find out more, and offer a more complete comparison with the 1991-92 story (watch this space for reports from the field later in the year).

But there have also been downsides of land reform for drought coping. The decline in irrigated production with the transfer of large-scale farms has had impacts on the larger picture. Large-scale commercial farms never produced huge amounts of food in the 1990s, focused as they were on high value export commodities. But irrigated maize (and wheat) were important, both for food and feed, and without these supplies, there is increasing reliance on imports (although as shown in the blog a couple of weeks back, imports of food were massive in 1991-92, contrary to popular views that food grain imports are just a recent phenomenon). With land being far more utilised than in the past, with many more people on the land in multiple small scale farms (again contrary to some popular opinion that emphasises underutilised land â€“ this was a big issue in the 1990s too), there is now less of a buffer. As discussed last week, livestock would often poach graze in underutilised ranches, and this provided an important source of reserve fodder in times of drought. These options no longer exist, and the system has little slack, making shocks like drought more keenly felt. This makes having national strategic reserves, and a contingency planning policy, all the more important. Ever since the structural adjustment programme got rid of grain reserves, arguing that this was an inefficient and costly approach given the availability of cheap food on world markets, there have been limited centralised reserves. This makes coordination and payment of imports essential â€“ something that plagued the 1991-92 response, and has done again today.

So, as ever, there is not a simple response to the question of whether land reform has improved drought resilience. The important point though is that with land and production reconfigured along with local economies, there is a need to rethink drought response policies, along with the way we monitor food production and livelihood vulnerabilities. With changes in system functioning, resilience has to be constructed in new ways, based on new forms of production, and social and market relations. Resilience planning, has not got to grips with the new situation. Unfortunately in 2016, we have more or less the same (late and poorly targeted) response we had in 1991-92. Partly this is due to lack of capacity, and the form of routinized, sometimes rather panicked responses we are seeing from the state, and partly this is due to the fact that much of the â€˜humanitarianâ€™ aid response â€“ by WFP and the western donors â€“ does not really even consider the role of the new resettlement areas, and their integration in the new food and livelihood economy, thanks to the legacy of sanctions. This is hampering sensible thinking and effective responses.

The sooner the post land reform land, livelihood and economic contexts is taken into account in the planning of drought responses, and so-called â€˜resilience buildingâ€™ programmes the better. Currently lessons are not being learned, money is being wasted, and effective responses are lacking.