A young David Pocock would lay awake in bed, scared for his life as violence and instability gripped Zimbabwe, but his grandfather says those events triggered the "finest thing that ever happened" for the Wallabies flanker and his brothers. 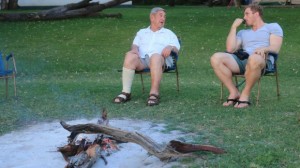 David and his grandfather ‘Pop’ Ferguson on the farm in Zimbabwe. Photo: ABC/Winsome Denyer

As Pocock weighs up his rugby future and a likely 12-month sabbatical to study, the ACT Brumbies star has opened up about his life on and off the field for a two-part Australian Story ‘True Grit’Â series on ABC.

One of the biggest turning points was when he and his family feared for their lives as President Robert Mugabe proceeded with the process of land redistribution.

A neighbouring farmer was shot dead and his son was seriously wounded after being shot nine times.

That’s when the Pococks fled, with David turning to rugby as his way of dealing with everything he’d seen and experienced.

“It still brings a lump to my throat. In retrospect, it’s the finest thing that ever happened to those boys,” said Pocock’s grandfather, Ian Ferguson.

The Pococks left extended family behind, including “Pop” Ferguson. Pocock’s dad Andy said:Â “The kids saw too much and it affected them greatly.”

But leaving Zimbabwe opened the door to Australia, where Pocock turned to rugby as a coping mechanism and his boyhood obsession turned into a career as one of the world’s best.

“Leaving Zimbabwe and coming to Australia, pretty much everything about our lives changed,” said Pocock’s mum Jane.

“…Rugby isn’t defining for Dave, it’s not what defines him as a person.”

Pocock is preparing for his 10th year in Super Rugby, but before the season begins he is facing the biggest rugby decision of his career.

The Brumbies are hoping he makes his decision before they start their Super Rugby campaign against the Wellington Hurricanes on February 26.

But while speculation swirls around his next contract, Pocock has always been clear in that he doesn’t want rugby to define who he is.

The ABC documentary tells Pocock’s story from a young age in Zimbabwe to his off-the-field charity work and supporting social justice issues, as well as looking in depth at his comeback from two knee reconstructions.

“His physical presence and his personality can be quite jarring, because he’s so big, but he’s very soft and quite gentle,” said wife Emma Pocock.

Pocock returned to Zimbabwe at the end of last year after helping the Wallabies into the World Cup final in England.

His holiday was spent getting up close with white rhinos and running alongside gun-wieldingÂ anti-poaching scouts.But the political instability in the country more than a decade ago changed Pocock’s life direction.

“I remember being pretty scared, mostly just at night. As a kid, all the different scenarios are going through your mind,” Pocock said.

“… I knew I had some trauma stuff in there that I needed to actually tell people about and talk through, but in my mind there were people way worse off. I’ve got this opportunity, I’ve got sport.”

Pocock uses Ghandi as inspiration, driven by: “Be the change you want to see in the world”.

Andy Pocock said: “David’s passion is to see people in need get a fair go, like we’ve been given a fair go.”

Pocock re-established himself as one of the world’s best players, withÂ Stephen Larkham admitting last week Wallabies coaches agreed they needed Pocock on the field to win games.

That’s why the Brumbies are so keen to keep him, even if it means paving the way for him to temporarily step away from rugby to chase study opportunities.

Pocock used his trip back to Zimbabwe to help revitalise his mind and body after a gruelling year for the Brumbies and the Wallabies.

“It was interesting, I spent a week at a few different rhino conservations, places that are trying to work on that,” Pocock said.

“They had a selection camp [for anti-poaching scouts] at one of the places so I did a morning of training with them, it was pretty tough. There are some small guys, but very fit and very tough – they run all day. It was good fun.”

* Australian Story: True Grit will air on MondayÂ February 22 and 29 at 8pm on ABC