FOUR people were killed on the spot on Monday morning when a South African registered Toyota Quantum was involved in an accident with a sedan in Mbalabala. 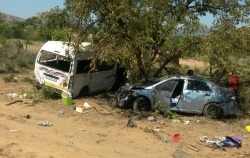 The accident reportedly occurred when the driver of the Quantum, who was coming from South Africa heading towards Bulawayo, tried to overtake when there was on-coming traffic resulting in a side swipe.

Witnesses said four people died on the spot while the injured were ferried to a Bulawayo Hospital.

Matabeleland South police spokesperson was not answering his phone when contacted for comment but a cop who spoke on condition of anonymity confirmed the accident.