Fortunately, it wasn't me who first coined the wording, "history repeats itself". But it is me though who's trying to align the saying to Zimbabwean context. Interesting, isn't it? 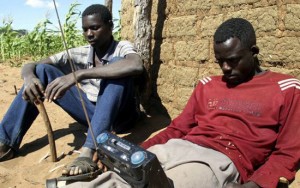 Oral and written evidence helped me get a glimpse of some of the least manipulated historic moments in the build up of what we now call Zimbabwe. And it is out of these narratives that I am just going to reflect on.

The people I met with a history of not being “born-free”, told me something I can now strongly relate to. They said, for the sake of wanting to listen to the consciousness that they considered as positive for their development towards liberation, they used to listen to a ‘patriotic’ radio station based somewhere in the Mozambican territory.

They also say that, it was a very dangerous act to indulge in, because it was something the Rhodesian Authorities could use as strong grounds to imprison, kill or to physically assault the ‘culprit involved’.

And since it was a very dangerous thing to do, they could listen to this ‘patriotic’ station whilst they were tucked in with blankets, with the windows and doors exceptionally closed.

But why would the simple act of accessing information be deemed as that heinous and dangerous? Because people can only be put to passivity when you bar them from important information and then apportion them with manipulated content that can help preserve a certain status quo.

I do not think that many people of that generation thought people with the vision that they used to listen to, tucked in blankets would change for the worst. They could not imagine that two decades later, they were to be looking for different audio, video and other web based interfaces’ feed for mental liberation.

Remember those scenarios when possessing satellite receivers and radios with AM tuners would land them into huge trouble. But not trouble from the Rhodesian Authorities, but t.r.o.u.b.l.e from a fellow black brother and the reasons had not changed rather.

But why is the brother behaving like the estranged stranger? Simply because history repeats itself!!!

There was that point in time, when ideological and physical tug-of-war war was on. To extinguish the ‘revolutionary’ flame, the Rhodesian Authorities had to victimise the image of their ‘enemy’ of that day.

To achieve this, derogatory words could be used. That is when the words, ‘gandanga’ and…among others which I don’t know were birthed.

But at the same time, ‘patriotic’ fighting organisations did retaliate using the same tactics. Words like ‘Sell-outs’, and…were again birthed. And aren’t we seeing that in contemporary Zimbabwe? If so, then it just shows that history repeats itself.

Do you also remember when the Rhodesian Authorities developed a literary movement for apolitical text? And as of now, look at the rise of inspirational books and the Gospel of prosperity. Words that make you as a human being fully acknowledge yourself as the sole reason behind your failures, and not the government. Words that say, that it only takes you to empower yourself economically thereby removing blame from the current rulership.

And on my last note, I take on Mr Smith, a man who did swear, that the leadership of the white man would not be put to ruins within the next thousand years, and the one thousand years’ period is still yet to end but where are we now?

So my question is, will history repeat itself again in these perspectives? But so far, history has been efficient in repeating itself all along and will it miss its beat this time around?