Wildlife rangers in northern Zimbabwe are tracking a lion that allegedly mauled a man taking part in an outdoor prayer meeting near Lake Kariba, a conservation group reported on Tuesday. 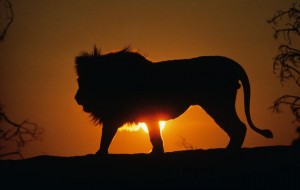 The man, who has not been named, suffered a “deep cut” to his chest, but was recovering, said the Kariba Animal Welfare Trust (KAWFT) in a post on Facebook.

The attack happened in a bushy area lateÂ on FridayÂ evening.

The trust said the man was taking part in a prayer “vigil” and it appeared that others were present. Locals said the man had just stoked the fire and had nodded off to sleep.

Nobody else was reported injured in the attack.

Initial reports said the lion was a male. However a female was seen in the area on Sunday, said KAWFT. It was not clear yet if this lioness is the one that attacked the man. Lions are known to roam in this part of Kariba, a National Parks and Wildlife Authority area.

Lions killed two people in separate attacks in the town in March 2013. Again, the attacks happened in the bush.

In one incident, a woman was attacked and killed while making love to her boyfriend.

In 2014, a lion killed a man as he docked his boat on the shores of Lake Kariba

Most lion attacks on humans in this part of southern Africa happen at the beginning of the year when the grass is thicker from the rains and it is harder to see the animals.

Debbie Ottman from KAWFT told News24 that despite the drought, the grass was noticeably more lush. “We haven’t had huge amounts of rain. But it’s gotten thick,” she said.

Officials are now warning locals to stay away from bushy areas.

KAWFT said: “Those who use the bush for their church gathering are also strongly encouraged to avoid such places up until the vegetation is open enough for people to see clearly.”