NEW US Ambassador to Zimbabwe, Harry K. Thomas Jr, has said Washington will not change its position on relations until Harare starts respecting its own laws. 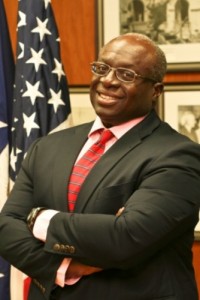 Thomas is the Barrack Obama administrationâ€™s new man in Harare after the end of Bruce Whartonâ€™s tour of duty last year.

The new US envoy met President Robert Mugabe this week and told the veteran leader that Washington was ready to improve relations with Zimbabwe if Harare respects its laws.

â€œWe stand by the commitments that we made to the people of Zimbabwe at independence in 1980; to work together to promote democratic institutions, equitable economic growth, public health, and food security,â€ said Thomas.

â€œThe United States shares the desires of the people of Zimbabwe, who want to see a peaceful, democratic, and prosperous Zimbabwe that provides for its people and contributes to regional stabilityâ€.

Relations between Zimbabwe and the US soured in 2002 after Mugabe embarked on a chaotic and violent land redistribution programme which drove out white commercial farmers.

The US and the European Union (EU) cited gross property and human rights violations as well as electoral fraud and imposed sanctions against Zimbabwe.

The EU has since removed most of its sanctions but Obama Washington will maintain its penalties, describe the Mugabe regime as a threat to US foreign policy.

Meanwhile, Thomas said he would work to convince Mugabe to realise the importance of observing the rule of law, which is a critical component of economic development.

â€œTo realize these goals, we strongly believe that it is important to engage with government and non-governmental entities alike to promote our shared values and to work together in areas of common concern.

â€œWe view this ongoing dialogue as part of building the bilateral relationship.â€

He also said it was Americaâ€™s desire to encourage its citizens to invest in Zimbabwe.

â€œThe New Embassy Campus is another tangible expression of the United Statesâ€™ commitment to our relationship with Zimbabwe.

â€œThe work that has begun on the construction of our New Embassy Campus is projected to create more than 850 job opportunities for local Zimbabwean workers and inject more than $30 million dollars into the local economy.â€