The El NiÃ±o drought is hitting hard this year. Livestock in particular are suffering, as grass and water are scarce. Some fear that it could be as bad as 1991-92 when around a million cattle died. 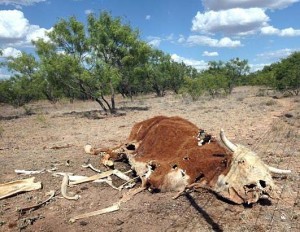 To date some 7000 cattle mortalities have been recorded, the majority of which have been in Masvingo province, as well as Matabeleland. Government and aid agencies are encouraging farmers to destock, urging people to buy supplementary feed to save breeding stock. Drought task teams have been established in the affected provinces, and emergency feedlots are being established. It is a very serious situation. As perhaps the most valuable asset that most people have, losing herds can be devastating for livelihoods and recovery takes many years. Some small showers have recently improved grass conditions in some places, but the amount of fodder available is clearly grossly inadequate to see animals through the long dry season across the coming months.

In this blog I again draw on work we carried out in 1991-92 in Chivi communal area, and is reported in the book, Hazards and Opportunities. During 1991-92 overall cattle survival among our sample was only 41%. This was the case for both large and small herd owners, with no significant relationships being shown between pre-drought herd sizes and survival rates. As now, it was a widespread drought, with all areas and all people affected. By the end of the drought 68% of households had no cattle at all, up from 55% before the drought. Drought recovery took years, and it was only by the late 1990s that herds had reached pre drought levels.

Herd composition is also affected by drought, and in turn affects the recovery dynamics. The table below shows the composition in the Chivi sample, pre and post 1991-92 drought. Cows were especially badly affected (particularly those with calves), although heifers survived better, and were the basis of post-drought recovery.

The pattern of response among Chivi herds during 1991-92 is shown in the Table below. This differentiates between two phases of the drought: the early period before December 1992 and the later phase after this time and before the end of 1992.

Movement out of the area was a vital strategy. However it took on a different form to earlier droughts. Data from the 1982-84 drought and the impact on cattle survival in Mazvihwa, Zvishavane district collected during my PhD studies (Scoones 1992), show how early movement was crucial to overall survival.

But by contrast to 1982-84, movement had less of an impact in 1991-92. Cattle were moved from Chivi to a variety of sites during late 1991. In the first part of the drought, 29% of herds were moved out of their home area to another site within the communal lands. By the second part of drought this had risen to over 35%. Illegal grazing outside the communal area (in resettlement areas or commercial farms) represented another type of movement. Nearly 10% of herds had been moved to such sites in the first period of drought and by the second period a quarter of all herds were using illegal grazing. However, the droughtâ€™s impact was so extensive and so dramatic that movement within a large radius was pointless. Animals that had been moved earlier got stranded, unable to benefit from the micro-management afforded to cattle resident at home kraals

During 1991-92, the largest cause of mortality was death due to starvation or extreme water shortage (47.7%). A significant number of animals were slaughtered just prior to death through poverty in order to salvage some meat for local consumption or sale (30.3%). Low nutritional status is linked with disease susceptibility and a number of animals died either directly from illness or were slaughtered because of disease (4.5%). Extensive searching for food required animals to wander far. This meant that a number were permanently lost; either they died while out foraging or they were stolen (5.7%). Foraging also had to take place in dangerous places (road edges, mountains, river banks) and a number of cattle died due to accidents (7.2%). Only very few animals (4.5%) were purposefully slaughtered.

The pattern observed during 1991-92 parallels that in previous droughts. Due to the fact that cattle are considerably more valuable live (for draft power, manure, milk etc.) than dead (sale value), there are very strong incentives to try and maintain live stock. Destocking is a risky option as the terms of sale during drought and repurchase following drought are not favourable to the herd owner. The costs of not having animals available to plough in the rainy season (assuming rains came) is so high that most farmers retain their stock as long as possible. No matter how much the government or the NGOs beseeched livestock owners to destock, they didnâ€™t, and the rationale was clear.

The 1991-92 drought mortalities meant that much restocking during the 1990s was with mixed breeds, or animals purchased from commercial ranches. During the land reform, breeds got mixed even more, with the hardy indigenous Shona, Tuli and other breeds being diluted in the nationâ€™s genetic stock. Indigenous breeds are well known to be able to survive off mixed diets of grass and browse and can survive without water for long periods. By contrast the larger, grass-dependent â€˜improvedâ€™ breedsâ€™ condition quickly deteriorates when grazing and water is scarce. In many respects, Zimbabweâ€™s cattle herds are less resilient than they were before.

What lessons can be drawn?

First, flexible movement is key, and restrictions imposed by veterinary controls can result in major increases in mortality. However illegal movement to underutilised commercial ranches is now not possible, nor is lease grazing on ranches. Most of these areas are now resettled as part of the land reform. Movement to the new resettlements from the communal areas has been a regular feature of the past 15 years, as have new relationships being struck with A2 farms. Relief grazing on state land is also vital, and so making access to state farms, military land and national partks will be important. These strategies will be crucial for herd survival in the coming months, and need to be encouraged and facilitated.

Second, access to water is almost as important as grazing, and in the past many animals perished from thirst rather than starvation (although usually a combination). A focused public works programme that invested in rehabilitating water sources, including pumping from dry rivers, establishment of mifuku, and so on, could be a highly productive investment.

Third, supplementary feeding is vital, especially for maintaining a core breeding herd. In the early 1990s there were not so many agrodealers, and certainly very few out in the rural areas. This has changed, and means that the purchase of blocks and other supplementary feeds has become much easier. People also have experience of using such sources of feed now, and will likely make much more use of them this year than in the past. Ensuring market supply, and offering subsidised options, may be a good investment.

Fourth, encouraging people to sell animals early as part of a destocking campaign has been a failure in the past, and is likely to be so again. While some richer A2 and A1 farmers, with other sources of income, and no reliance on draft animals for ploughing, may opt for destocking sales, most will only sell when animals are already virtually dead. Those with access to land, water and feed may take advantage of such poverty sales and buy up animals for rehabilitation and later fattening. Here the role of A2 farmers may become important, compared to the past.

The costs of losing herds is devastating as we saw in the early 1990s. The impacts are felt for years, undermining agricultural production and livelihoods. Ensuring that mortalities are reduced, and that animals survive is essential, but it seems the efforts being invested now are too little, too late; and sadly making the same mistakes of the past.