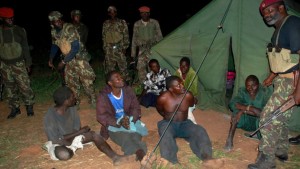 At a press conference in Beira, the press officer of the Sofala Provincial Police Command, Sididi Paulo, said the first attack occurred at about 10.00 in the Zove area, near the small town of Muxungue, against the first convoy of the day travelling along the 100 kilometre stretch of the main north-south highway (EN1) between the Save river and Muxungue.

Â There were 90 vehicles in this convoy, one of which, a Mitsubishi, was hit and seriously damaged in the Renamo ambush. One of its occupants was seriously injured in the left leg, and is now undergoing medical treatment in Muxungue Rural Hospital.

The second ambush, at about 11.00 occurred on the second stretch of EN1 where vehicles now travel in convoy, between Nhamapadza, in Maringue district, and Caia on the south bank of the Zambezi.

Arguably this incident should count as two ambushes, since a Renamo gang, near Fudza village in Maringue, struck twice at the convoy, hitting two of the 60 vehicles travelling under police escort. Paulo said that one of the vehicles was immobilised in the attack, but the defence and security forces rescued all the occupants of the two vehicles and they are now safe and sound in Caia town.

Attacks on EN1 were frequent during Renamoâ€™s low level insurrection in Sofala in 2013-14, but it was hoped that all such ambushes would stop with the signing of the Agreement on Cessation of Military Hostilities on 5 September 2014 beween the then President, Armando Guebuza, and Renamo leader Afonso Dhlakama.

Renamo has now torn that agreement up, and resumed attacks on the road on 11 February. Since that date, according to the police, there have been 18 Renamo attacks on the Save-Muxungue and Nhamapadza-Caia stretches.

The police felt obliged to protect lives by re-introducing a system of conviyes under armed escort along the Save-Munxungue stretch on 17 February. On 21 February, a second convoy was introduced on the Nhamapadza-Caia stretch. Along both stretches of the main road, there are four convoys a day, two in either direct direction, in the morning and the afternoon, and only in the hours of daylight.

Also on Tuesday, according to an AIM correspondent, there was a clash between Renamo gunmen and the defence and secuity forces, in the Honde area of Barue district, in the central province of Manica. This came three days after two policemen were injured in a Renamo ambush in Barue.

Details on the latest clash are sparse, with no official confirmation from the police yet. Medical sources confirm that some wounded have entered a local health unit, but did not say whether they were from the defence forces or from Renamo.