A DELEGATION of US elected representatives led by Senator Jeff Flake from Arizona is on a three day fact-finding mission to better understand wildlife conservation and regional security issues, the US Embassy in Harare has announced. 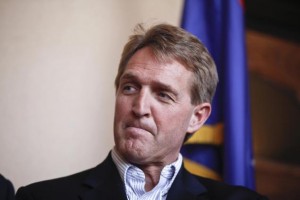 The visit is part of a four nation mission covering Botswana, Mozambique, Namibia and Zimbabwe.

A statement from the embassy said the delegation will meet Embassy staff and has also requested meetings with government officials, private sector executives and civil society organizations.

The mission is aimed at enabling the visitors to â€œlearn about issues of importance in the US-Zimbabwe bilateral relationship, including the protection and conservation of wildlifeâ€.

Senator Jeff Flake (Arizona) sits on the Judiciary Committee, the Energy and Natural Resources Committee, and the Foreign Relations Committee where he serves as chairman of Subcommittee on Africa and Global Health Policy. Prior to his election to the U.S. Senate, Jeff served in the U.S. House of Representatives from 2001-2013 representing the East Valley region of Arizona.

The visit comes seven months after a US dentist, Walter Palmer, provoked global outrage by killing a famous lion named Cecil in Hwange. The lion had a GPS collar fitted for research project by Oxford University.

Many Western conservationists have interests in Africa including in Zimbabwe.