A WIDELY shared photograph of a lone man standing outside Zimbabwe's parliament with a placard demanding answers to the country's missing diamond billions has sparked admiration as well as memories of abducted activist, Itai Dzamara. 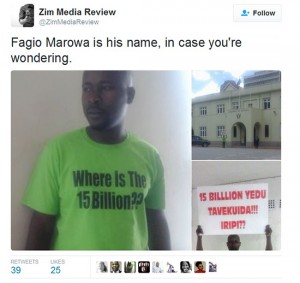 The man, who has been named online as Fagio Marowa, was snapped on Wednesday wearing a green T-shirt and holding up his placard in front of police officers at the entrance to the parliamentary precinct in the capital, Harare.

His placard mentioned the US$15 billion that President Robert Mugabe recently said had been lost to diamond firms mining in the Chiadzwa diamond fields. “Iripi?” the placard asked in Shona, meaning “Where is it?”

“This Comrade went to Parliament to demand OUR 15 BILLION,” well-known activist, Promise Mkwananzi, said on Facebook.

Press watchdog @ZimMediaReview called Marowa, “A real candidate for Zimbo of the Year” on Twitter.

Zimbabwean activist, Itai Dzamara, who mounted a one-man protest metres away from parliament in Africa Unity Square, was abducted in March 2015 and has not been seen since.

The opposition Movement for Democratic Change (MDC) has blamed the Mugabe government for his disappearance.

Rumours swirled early on Thursday that Marowa had also been abducted. But a post on his Facebook page appeared to confirm he was “safe and sound”.