THE art exhibition depicting the 1980s Gukurahundi atrocities in Matabeleland and Midlands provinces has opened to the public in South Africa, almost a year after it was banned in Zimbabwe. 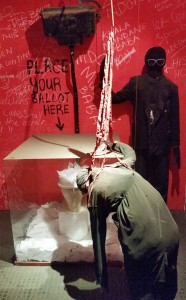 Bulawayo based visual artist, Owen Maseko, got into trouble with the state after he stage the exhibition titled Sibathontisele (Lets Drip On Them), at the Bulawayo Art Gallery, five years ago.

The exhibition forced a section of the gallery, where it had been put up, to be sealed off from the public, while the case was before the courts.

In April last year, the Supreme Court ordered Maseko to pull down the controversial artwork and not to exhibit it anywhere in the country.

However, the exhibition has found its way to South Africa, where it is on display at the Open Society Initiative for Southern AfricaÂ (OSISA) offices in Johannesburg.

The exhibition opened to the public on 25 February and runs until 22 March.Â The official opening was presided over by OSISA director Tiseke Kasambala, with Maseko in attendance.

“This is the first time my paintings and installations, ever since I created them, have got the opportunity to be viewed without any form of interference,â€ said an overjoyed Maseko.

He said taking the exhibition to South Africa was worthwhile as the country is home to millions of Zimbabweans, some of whom were affected by the atrocities.

â€œIn South Africa we have millions of Zimbabweans mostly those from this region, so personally I feel that the exhibition is just as good as showcasing home,â€ he said.

Maseko revealed that the exhibition had received a lot of interest from several other African countries, adding they planned to tour the continent.

â€œI think the tour will be good in the sense that this is a story most African countries need to know, which says a lot about our African leadership.

â€œThe fact that the (court) case was dropped but the exhibition is still banned clearly shows that we still have a long way to deal and address Gukurahundi atrocities and freedom of expression in Zimbabwe,” Maseko said.

According to a report by the Catholic Commission for Peace and Justice (CCJP), more than 20,000 civilians in Matabeleland and Midlands provinces were killed by members of the Fifth Brigade.

President Robert Mugabe only described it as a “moment of madness”.

Vice President Phelekezela Mphoko recently torched a storm when he sought to exonerate Mugabe from the killings, saying the veteran leader was not involved in the atrocities.