GWAYI: A 16-year-old boy has been dragged to court for attempted murder after he stabbed a villager over a $1 he owed him. 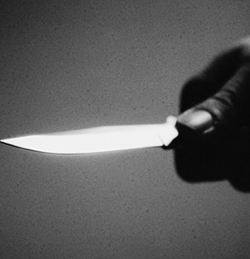 Godknows Ndlovu, of Gwayi Compound, told the court that the money meant a lot to him because he fends for himself as his stepfather doesnâ€™t take care of him.

â€œI wanted my money back because I had used all I had to pay my fees. I survive on doing piece jobs as a cobbler, lumberjack and brick moulder to raise money for school fees since my father passed away and my stepfather doesnâ€™t take care of me,â€ he told Hwange regional magistrate, Dambudzo Malunga, last week.

Asked why he committed the crime he said: â€œI had asked for my $1 from the complainant that he owed me. I got angry and manhandled him when he told me he didnâ€™t have. We fought and he overpowered me as he pinned me down.

â€œI panicked and drew a knife and stabbed him,â€ said the boy.

The magistrate sentenced him to four strokes with a rattan cane.

In addition, the juvenile was sentenced to two years which were suspended for four years on condition of good behaviour.

The court invited the boyâ€™s mother to testify and she confirmed that her new husband despised her children from her previous marriage.

This prompted Malunga to quiz her on why she â€œremained in the marriageâ€ wondering if it was â€œfor sexual intercourseâ€?

The court heard that on August 8, 2015 at around 5PM at Gwayi Business Centre, the juvenile met Mncedisi Dlamini, of Dete and asked for his $1.

â€œThe two had a misunderstanding over the issue and the accused produced a knife and stabbed the complainant once on the back below the left shoulder,â€ said the prosecutor, Tawanda Sigauke.

Dlamini was rushed to Mpilo Central Hospital in Bulawayo where he was admitted for some days.