A FASHION stylist of Zimbabwean origin has been banned for life from all British Airways flights after a 'minor argument' with another passenger over stretching her legs on a Dubai plane. 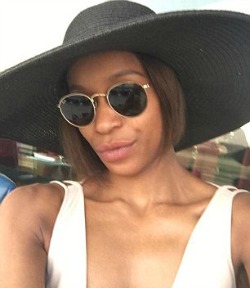 Bridget Nhire, 33, was handcuffed and escorted off the flight after a man sitting behind her complained that she kept getting up from her seat.

She claimed the man in his 40s began arguing with her at 30,000ft on a Heathrow to Dubai flight – and was baffled as to why she was restrained.

However other passengers claimed she was drunk during the flight, hurled racist remarks at staff and passengers and tried to get into the pilot’s cockpit.

Nhire, from Uxbridge, Middlesex, said: ‘I was treated like a terrorist. It was humiliating.

‘I was sat down and they put tight handcuffs on my wrists and strapped me to the chair. I had bruises for weeks.’

The fashion consultant added: ‘I only got up three times, but the guy behind me was complaining and asked me why I kept getting up.

‘I said I have a right to get up and walk around, but it escalated into a heated debate.

‘The crew asked me to move to the front and said I was being aggressive.’

She hit back at claims from the crew that she may have been drinking.

She said: ‘They thought I was drunk. I’d had two glasses of white wine with a chicken meal on the plane.

‘I was definitely not drunk.’

However a passenger on the plane, who wished to remain anonymous, told MailOnline: ‘She went to the toilet at least 20 times and had what looked like little bottles of alcohol in her hand.

‘She was screaming at people for about an hour and the staff went over to calm her down, at which point she started shouting “This is because I’m black. This is racist”.

‘She started shouting at a man a few seats behind her who was telling her to shut up and she was trying to reach across to him. She was really aggressive.’

‘Then she ran to the front of the plane to the cockpit and said “I’m going to talk to the pilot”, at which point the air stewards had to restrain her.

‘At least four people were trying to handcuff her, and one put a blanket over her head. It was genuinely traumatising.

‘There were small children on the plane. People were terrified. I just couldn’t believe what was happening, it was absolutely disgraceful.

‘There was talk of doing an emergency landing in Iran which we were flying over at the time.Â I have the utmost respect for the staff for dealing with it so well.’

A second passenger, who also wished to remain anonymous, claimed:Â ‘When they strapped her in the seat she was shouting, “This is slavery! This is slavery!”‘

Nhire was forced to sit, accompanied by a security guard, for 90 minutes until the plane landed.

When other passengers had left the plane, Dubai police escorted her to a station but freed her without charge five hours later and gave her the life ban – which Nhire has branded an over-reaction.

She said: ‘When the police released me from the handcuffs I just broke down.’
She added: ‘I was in tears, they didn’t know what to do with a crying woman.

‘Nobody wanted to listen to anything I had to say. I was a long term customer with BA. I used to think they were the best, but now I would warn anybody never to fly with them.’

Ten days later Nhire discovered British Airways had cancelled her seat and refused to let her on a plane to fly back home when she turned up for her return flight.

She was left stranded at Dubai International for eleven hours and called her mother to organize a different flight.

She is demanding Â£350 compensation from the airline as a result.

Her mother said that BA needed to be held ‘accountable’ for leaving her daughter stranded.

Speaking from her mum’s semi-detached homeÂ in Ickenham, west London, Nhire insisted that BA over-reacted and vowed never to use the airline again.
She said: ‘I can’t believe they didn’t tell me in advance that they had cancelled my flight.

‘I want people to be careful, they need to be aware that this is how BA treat its customers.

‘I was a long term customer of BA and think they were the best.

‘But I am appalled and disappointed. I just wanted to go home.’

BA said it undertook a full investigation analysing statements from crew and passengers before taking the ‘rare’ decision to ban her.

The airline stated that it does not comment on individual cases, but says lifetime bans can be appealed.

A spokeswoman added: ‘Our customers and crew deserve to enjoy their flights, and not suffer from any form of disruption.

‘This sort of behaviour will not be tolerated, and the appropriate action will always be taken. â€‹

‘We would never issue a lifetime ban without first carrying out a thorough investigation into an incident – which includes taking witness statements from other customers and reports from crew.

‘If a customer has any future bookings with the airline at the time the ban is imposed, we will issue a refund.

‘As detailed in the letter issuing the ban, customers can appeal the decision.’

The second passenger on the flight told MailOnline: ‘She was waving her iPad around at the staff as they tried to restrain her screaming “I’m recording you”.
‘It was clear she had been drinking.Â It was ludicrous and really distressing.

‘The staff were not racist in any way, shape or form towards her, they were just trying to calm her down.’

Nhire denied claims that she been drinking or making racist remarks.

The report said British Airways were contacted in regards to all the claims but were unavailable to provide a comment on claims about Nhire alleged drunken and racist behaviour.