PARLIAMENT has written to all MPs fired on the instructions of their political parties to repay outstanding loans for vehicles they acquired under a Parliamentary loan scheme or risk having the cars attached. 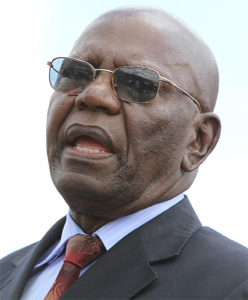 Recalled from Parliament after being expelled from Zanu PF … Dydmus Mutasa

In a letter to one of the affected former MPs dated 11 February 2016, Clerk of Parliament, Kennedy Chokuda, advised the politician to repay $26,565 within 14 days.

â€œThis letter serves as a final letter of demand and, therefore, I give you fourteen days, from the date of receipt of this letter to make full payment or to come to our office to make specific arrangements to pay,â€ reads the letter to the former MP.

â€œFailure to do so will leave us with no choice but to repossess the vehicle and dispose it to recover the amount owing and you will be liable for any costs that may be incurred and any other outstanding amounts in case the full amount is not realized upon disposal of the vehicle.

â€œZimra has advised that duty payable is $13 300.10, and you are advised to make separate arrangements with Zimra with regards to the payment of duty.â€

At least 21 legislators from the MDC-T were dismissed from Parliament on 17 March 2015 after the opposition party wrote to the Speaker of Parliament, Jacob Mudenda, indicating that they were no longer MPs as they had since formed a splinter group, the MDC Renewal Team.

The MDC Renewal Team later transformed into the Peopleâ€™s Democratic Party (PDP) which is fronted by Tendai Biti, the former MP for Harare East.

Parliament is also reported to be seeking the recovery of the loan vehicles from former Zanu PF MPs who were dismissed for supporting Joice Mujuruâ€™s alleged bid to replace Robert Mugabe as Zanu PF President.

Those targeted include Mujuru and Dydmus Mutasa who have since moved on and launched the Zimbabwe People First project.