Amid political and economic turmoil that has befallen Zimbabwe recently; the Roman Catholic bishop of Gweru diocese believes Zanu Pf is sorely to blame through its gross mismanagement of resources and abuse of power. 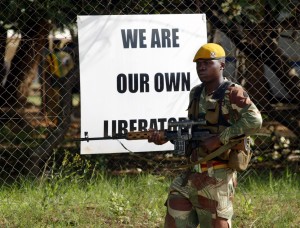 The bishop Xavier Munyongani on Sunday addressing hundreds of church followers in Gweru vehemently criticized the beleaguered Zanu Pf party for betraying the gains of the struggle and failing to be grateful to what God has blessed the nation with.

â€œGod blessed us with diamonds,imagine there were hidden during colonial era because the almighty wanted all Zimbabweans to enjoy the fruits of the land.To my surprise only the minority Zanu Pf officials has benefited from the cake of the nation wonder why our nation is cursed; when diamonds are looted daily by those in power we canâ€™t expect Godâ€™s blessings anymore,â€ he said.

Bishop added that it is actually a thorn in the flesh for the majority of long suffering Zimbabweans who are yet to benefit from the so called 1980 independence which still remains a myth. â€œ36 years while Zanu Pf is in power but no tangible gains have been enjoyed by the majority of citizens, whata shame to the former breadbasket of Africa,â€ he said.

In a country characterized by torture and fear during elections by Zanu Pf party, Munyongani discouraged youths from being used as perpetrators of violence ahead of the 2018 elections. â€œWe donâ€™t want bloodshed in the forthcoming elections it is inhumane and ungodly too. Especially those who beat up the elderly citizens should cease as they will invite a curse upon themselves,â€ said the Bishop.