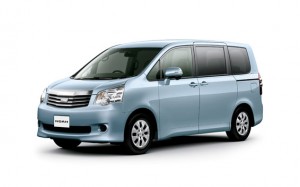 The Toyota Noah has the capacity to carry eight passengers and a driver. It had a Gross Vehicle Mass (GVM) of 1440 kg and a Net Vehicle Mass (NVM) as per regulated specifications, obviously meant for European roads and not for this country’s roads with the poor state that they are in.

However, about ten years after unveiling the model, the Toyota Noah had fallen out of favour with the rest of the world and Zimbabwe became the perfect ‘dumping’ site for the vehicles.

Initially, the Noah was seen as the ideal family car, but this changed soon as more and more people saw it as the ideal vehicle to help ferry people around without necessarily incurring large service- and fuel costs.

This reporter has personally experienced the difficulties faced by many commuters that use the Marondera to Mahusekwa route, but there is no doubt that the same problems exist all over the country.

Without the availability of public transport, local residents are forced to rely on the services provided by privately owned vehicles where a trip of 53 km can cost a passenger anything from $1.50 to $2.00.

Despite the presence of the police, roadblocks and Vehicle Inspection Department patrol vehicles, unregulated ‘taxi’ drivers still manage to escape prosecution for crimes such as overloading even when they are transporting double the regulated number of passengers.

If, when reading this, you are wondering if it is possible for a vehicle, designed to hold eight passengers and a driver, to double up on its number of passengers, this reporter can vouch for it, he has seen it first hand. The answer is Yes, it can be done! In this country it appears that any transgression is possible, even a vehicle with 17 people on board, stuffed in like cattle on their way to a slaughter house.

In the front seat are four people plus the driver who has very limited space to negotiate the controls, pedals and steering wheel. The second row seats four, the third row seats another four without the luxury of a back rest because they are sitting back to back with the four passengers who entered from the back of the vehicle and who are now crammed in facing the rear of the vehicle.

The reporter found the experience to be inhumane and horrendous, but sadly it is the ‘normal’ for passengers who have no alternative. As if that was not bad enough, the roof of the vehicle was loaded with a heap of building material and the driver was clearly competing with other drivers by driving at least 100 k.p.h.

A day to day nightmare on four wheels for millions and this reporter’s worst road trip ever!