MDC-T MP for Tafara-Mabvuku, James Maridadi, has vowed to approach the courts in efforts to compel the state to disclose the full amounts realised by government through its joint ventures with diamond mining firms in Marange since 2009. 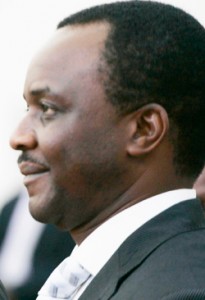 This comes after he has continuously failed to get answers from Finance Minister, Patrick Chinamana, through parliament.

The former ZBC staffer was speaking to NewZimbabwe.com on the side lines of a Friday conference called by the Media Institute of Southern Africa (Zimbabwe Chapter) to brainstorm on how public entities could best be compelled to avail information critical to the general livelihoods of ordinary citizens.

â€œItâ€™s very frustrating. Information on the diamonds; the opaqueness that exists in Chiadzwa is a sore point,â€ Maridadi said.

â€œI have asked several times the minister of finance to give us information and that information has not been forthcoming.â€

Instead, Chinamasa has gone on to compile figures relating to various taxes and levies imposed on mining firms, among them royalties, corporate income tax, mining fees.

Chinamasaâ€™s response incensed the MDC-T legislator who said in parliament last month he was demanding a “ball peck” of the overall amount realised by government since mining operations began 2009.

â€œIndulge me to say this. If you visit the Botswana website you are able to see how much money the government of Botswana realised last year but what the honourable minister is telling me is that the goverment does not know how much money came from diamonds.

â€œThat is what they are telling me! The minister responsible for Treasury is not in the know of how much money has been realised from the diamonds!â€

Maridadi has since failed to receive the answers he was looking for from government, prompting his intended decision to compel the authorities to disclose the figures.

â€œI have been toying with the idea of going to court to say look I have used another space which I occupy, which is Parliament and the information has not been forthcoming; maybe the courts should force the minister to give me the information,â€ Maridadi said Friday.

The firebrand MDC legislator said he was now waiting for the current impasse between government and mining firms over mining rights to subside before he could lodge his challenge.

In a birthday interview televised on ZBC-TV last week, President Mugabe said up to $15 billion worth of Chiadzwa diamonds could have been spirited away by private firms operating in the area.

Of the amount, President Mugabe said, the government failed to realise even $2 billion from the proceeds.

Mugabe’s critics have accused the veteran leader, his wife Grace and the military top brass of being part of a network that was plundering diamonds in Chiadzwa.