PADENGA Holdings Ltd, said a surge in European demand for meat from the reptiles made up for an almost halving of the number of alligators it harvested in Texas as it posted an annual rise in profit. 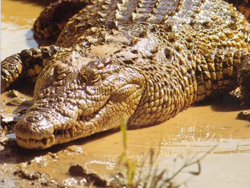 The company is the worldâ€™s biggest producer of luxury quality Nile crocodile skins.

Net income for the 12 months ended Dec. 31 rose to $7 million from $6.4 million the year before even as revenue declined to $27.4 million from $27.9 million, the company said in a statement Wednesday.

It slaughtered 46,025 Nile crocodiles from its farms in northern Zimbabwe as sales by the company of the reptilesâ€™ meat in Europe rose 25 percent to 290 metric tons.

Operations at Padenga-controlled Lone Star Alligator Farms LLC in Texas almost halved to 8,586 skins after the company deferred culling by a year to improve quality of the hides.