In his 92nd birthday interview on 3 March President Mugabe stated that the diamond sector had made $15 billion but the country had only received $2 billion from it and suggested various options for reforms. This came after the Zimbabwe Mining Minister announced on the 22nd February that all diamond companies must cease operations with immediate effect after months of wrangling over the governmentâ€™s proposal to merge all of the companies into one amalgamated entity. 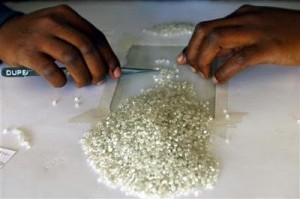 â€˜Itâ€™s been clear for many years that Zimbabweâ€™s diamond industry needs to be radically reformed. Any reforms must ensure that Zimbabweâ€™s security elite can no longer have illicit access to the countryâ€™s diamond wealth.Â  The diamond industry needs to become completely transparent and those involved held accountable for their actionsâ€™ said Nick Donovan, Conflict and Fragile States Director at Global Witness.

â€˜Zimbabwean law bizarrely vests mineral rights in the President, not the State. President Mugabe himself approved the operations of these companies, which he now says cannot be trusted.Â  Investigations by Global Witness over the past 4 years have exposed links between members of the security forces, controlled by the President, and some of the mining companies operating there.Â  It is as if the President is complaining about his left hand stealing from his right hand,â€™ continued Donovan.

â€˜IfÂ  $13 billion dollars of diamond money really has gone missing from the diamond sector thatâ€™s eight times what the government just appealed for in humanitarian aid in response to the current food crisis which has left 2.4 million people without enough daily foodâ€™ said Donovan. â€˜Reform of the diamond sector could be a crucial opportunity for the almost three-quarters of the Zimbabwean population who live in poverty to finally receive some benefit from these precious stones.â€™