When a government owes international lenders US$7.1 billion - and internal lenders about US$2 billion - does not have US$1.5 billion to feed its own starving people, and yet can not account for US$15 billion from diamond sales, that is a great source of shame to us the people of Africa. 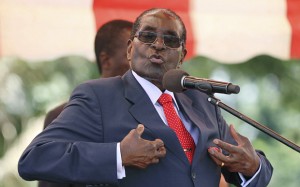 This behaviour by the Zimbabwean government always leaves me wondering what the international community would be thinking about us as a people – things they would never say in public – unless it was Donald Trump – for fear of being branded as racists.

If there is one thing that the ZANU PF government has managed to perform extraordinarily and exceptionally well throughout the nearly 36 years it has ruled Zimbabwe, is to bring shame and embarrassment on the people of this country.

I can give them that!

What else are we to say about a government that has no qualms about throwing a lavish US$800,000 birthday party for its President in front of a starving people, who just watch helplessly with cracked dry lips?

Similarly, what are we to say about a leadership that does not see anything particularly wrong with flaunting its riches to a people who can not even afford to pay rent for two rooms?

We have a country whereby the leadership has to be banned from travelling to Western capitals because all they ever did there was shop, whilst the people back in their own country went around wearing rags because they could not afford any new descent clothes.

A country whose leaders send their own children to the most expensive schools in the Far East, whilst the people they lead can not even afford to pay school fess for their own Â children at the cheapest schools, which government fails to provide with basic textbooks and stationery.

A country whose leaders seek medical treatment at the most state-of-the-art hospitals in the world, whilst the majority of the people in their own country are dying in their homes, as they Â can not afford even the most basic medication, which the government does not provide, but is only available at private pharmacies.

A country where orphans, the elderly and widows are treated with indifference, and left alone to suffer and die.

What else are we to say about a government that takes away land from those that can utilise it productively – and therefore, feed the nation – and parcel it out to political cronies who do not know the first thing about growing even chomolia – leaving the nation hungry?

We have a government that does not respect the rights of the people to complain about these things, and infringes on their rights.

In the eyes of the international community how does all that callous, uncaring, and cruel behaviour look, and what image are these leaders portraying about African people?

Is the image that they are portraying to the world not painting us all with the same brush?

Are they not portraying us as a savage and uncivilised group of people that, as David Livingstone once said, are ‘a couple of rungs below the evolutionary ladder’?

How else can one describe a father who would be busy munching on a bucket of KFC’s finest meal, whilst his starving wife and children look on – as this is exactly how our leaders are behaving?

Yet, Africans are known for their Ubuntu.

We are supposed to be a caring people, as we would never just look on whilst a neighbour has nothing to eat.

As African, we would all gather together and see to it that our neighbour was fed and every need catered for.

That is why in our African culture, there were never any orphans, as every child was the responsibility of the entire community – such that, if a child lost his/her parents, the whole community would chip in to make sure that he/she was well taken care of.

The chief always had a ‘zunde ra mambo’, crops that were meant to feed the disadvantaged within his/her community.

African have always been known for their communal spirit, and yet the Zimbabwean government is sowing a completely different spirit amongst the people.

A spirit of indifference.

To make matters worse, they are hardly apologetic about such callousness.

When ever did Zimbabweans hear our anyone in our government apologise for the suffering caused Â upon the people?

Has anyone in the ZANU PF government ever shown any sympathy or empathy for the suffering of the people of Zimbabwe?

Can anyone stand up and say they have ever heard someone in government utter the words, ‘We are so sorry for the suffering that you are going through?’

In fact, what Zimbabweans have been subjected to, over the past 36 years, is shameless and endless defensiveness on the part of government – blaming everyone else for our suffering, but never themselves.

This lack of compassion, sympathy, and empathy is what truly riles the suffering people of Zimbabwe.

Any family can go through lean times, but if the father does not seem to care at all, and would rather use the meagre resources available for partying, that is completely unacceptable.

Similarly, Zimbabweans are suffering, and yet the government cannot account for US$15 billion.

What are we as a nation – and the international community as a whole – to think about that?

The ZANU PF government has truly set a terrible example of what African leadership and Africanism is all about, thereby placing the whole of Africa into shame in the eyes of the entire world – portraying us as an incapable, shameless and cruel people – as that is exactly what the Zimbabwean government is.

Â° Tendai Ruben Mbofana is a community activist, communications specialist, writer, and journalist. He writes in his personal capacity, and welcomes any feedback. Please feel free to call/WhatsApp: +263782283975, or email: [email protected]com