WASHINGTON â€” International Monetary Fund resident representative in Zimbabwe, Christian Beddies, says resumption of direct financial aid to Harare might be â€œa long processâ€ and the answer might come in May after the conclusion of an assessment report on Zimbabwe. 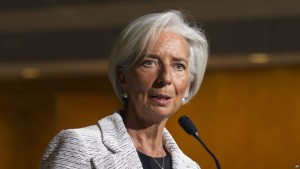 Asked in an exclusive interview with VOA Studio 7 for Zimbabwe if the IMF was ready to give Harare fresh funding, Beddies said, â€œLook, we are not there yet, this is a very long process, you may know that as part of our annual meetings last year, together with the World Bank, the authorities (Harare) had an opportunity to present a strategy on how to clear the arrears to the international institutions.â€

The arrears are preventing the IMF from extending new loans to Harare. Finance Minister Patrick Chinamasa proposed a plan in Lima, Peru, that he claimed will see Harare clearing its arrears of US$1,86 billon to international creditors, including the Bretton Woods institutions by April.

Late last year, the IMF said it might resume financial support to Zimbabwe as early as 2016 if foreign creditors accepted Harare’s arrears clearance plan and the government implemented economic reforms to boost growth.

But many economists doubt Harare can meet the ambitious target. Beddies concurred. â€œI think April was always a very ambitious sort of target and I think even after that you know, they were even more cautious in terms of the exact time when that was going to happen. I do not want to preempt some of the conclusion of our discussions now. But I think April would be too ambitious.â€

An IMF team is currently in Zimbabwe for two weeks to assess the final phase of the Staff Monitored Program and do the annual Article IV consultation. The IMF delegation is meeting government and business leaders.

The IMF team is on Tuesday expected to meet with the representatives of the Zimbabwe National Chamber of Commerce. Harare started the SMP – an informal agreement with the IMF to monitor implementation of its economic reforms – in December 2013, and claims that it has met its targets and is seeking a financial aid package.

Zimbabwe has suffered from a roll-back of investment from the West for the past 16 years. Without any balance of payment support and starved of foreign credit, Zimbabweâ€™s economy is headed south punctuated by deflation and 90 percent unemployment.

The countryâ€™s debt arrears to the three multilaterals, the International Monetary Fund, World Bank and African Development Bank, currently stands at $1,8 billion. As at the end of June 2015, Zimbabweâ€™s public and publicly guaranteed debt stood at $8,4 billion.

This comprises an external debt of $6,7 billion, representing about 47 percent of Gross Domestic Product, and domestic debt of $1,7 billion.