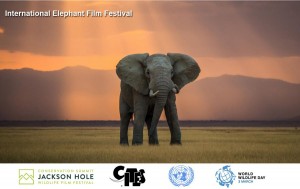 Geneva/Jackson, WY/New York 26 February 2016 – The Jackson Hole Wildlife Film Festival and the Secretariat of the Convention on International Trade in Endangered Species of Wild Fauna and Flora (CITES) teamed up in organizing an International Elephant Film Festival to raise global awareness of the various challenges facing the African and Asian elephants, as a highlight of UN WorldÂ Wildlife Day on 3 March. The Festival received more than 250 entries into the film competition, which were reviewed by over 75 preliminary judges over six weeks before the short list was passed on to the final judging panel. The distinguished panel ofÂ international judges who will select winners includes:

All the Presidents Elephants, Triosphere for NHU Africa

Manas: Return of the Giants, Ammonite, Ltd. and Kosmik Global

The Eyes of Thailand, DVA Productions in association with Indiewood Pictures

Naledi: Every Elephant Counts, Vulcan Productions in association with Off the Fence

Echo and the Elephants of Amboseli: Episode Two,Mike Birkhead Associates in association with Off The Fence for Animal Planet International

I Will Always Remember You, Hugo Guinness

For the Love of Elephants, Make Believe Media

Naledi: Every Elephant Counts, Vulcan Productions in association with Off the Fence

Minds of Giants. Vulcan Productions in association with Off the Fence

In judging the films the international panel is assessing the overall impact, cinematography and videography of the films. The views expressed in each film should not be seen as necessarily reflecting the personal views of the judges.

Winners will be announced at a high level event to mark the global celebration of World Wildlife Day at UN Headquarters in New York on 3 March 2016. Winning and finalist films will be subsequently showcased extensively throughout the world, through local screening events and broadcasts.