JAPANESE Prime Minister Shinzo Abe on Monday welcomed President Robert Mugabe, referring to the 92-year-old Zimbabwean strongman who is widely shunned in the West but frequently courted in Asia, as an esteemed African leader. 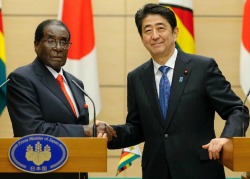 Mugabe, whose country is subject to sanctions by the United States and European countries over its tainted human rights record, was visiting Japan for the fourth time as president and holding his third meeting with Abe.

The Japanese Prime Minister said he wants to work with Mugabe, who chaired the African Union last year, to help with Japan’s push to reform the UN Security Council.

“By closely coordinating with Mr Mugabe… we wish to help promote reform” of the global body, Abe told reporters, in remarks carried by Jiji Press, referring to Mugabe as an esteemed African elder.

After their talks, Japan announced development aid worth 600 million yen ($5.3 million) for the nation to buy equipment needed to build roads.

The welcome for Africa’s longest-serving ruler comes as Japan tries to compete with China for influence in the continentâ€™s fast-growing economies and as Tokyo prepares to sponsor a major conference on African development this August.

Chinese President, Xi Jinping, welcomed Mugabe in 2014, calling him a renowned African liberation leader and an “old friend” of the Chinese people — one of the country’s highest compliments for visiting foreign leaders.

Abe met Mugabe at the last round of the Tokyo International Conference on African Development, or TICAD, held in 2013 in Yokohama. This year’s TICAD, slated for Kenya, will be the first to be held in Africa.

They also met last year during a UN disaster conference held in Japan.

Mugabe’s latest visit comes as Japan has tried to maintain cordial ties even with states controlled by leaders who have antagonised Western nations, most notably Iran.

Abe has also reached out to Russian President Vladimir Putin — under intense criticism in the West for the annexation of Crimea and fighting in eastern Ukraine — as Japan tries to solve a territorial row dating to the close of World War II.

Mugabe has led Zimbabwe since independence in 1980, with his rule marked by vote-rigging, mass emigration, accusations of human rights abuses and economic decline.

His government has been accused of systematic human rights abuses and tipping the country into a severe crisis through a campaign of violent land seizures.