JAPANESE Prime Minister Shinzo Abe made a Â¥600 million (US$5m) grant-in-aid pledge to Zimbabwe on Monday to help bring more Japanese companies back to the former agricultural powerhouse amid an aggressive foray by China. 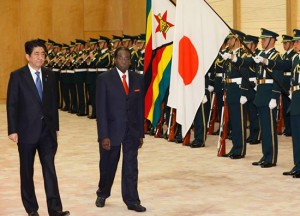 At a joint news conference after bilateral summit talks with the visiting President Robert Mugabe, Abe promised Â¥600 million in financial assistance to fund a road project in the resource-rich countryâ€™s north-south corridor.

He also said Japan would maintain close consultation with Zimbabwe to counter the severe food shortages there.

The aid pledge to Mugabe’s struggling country is Japanâ€™s second since last year, when it extended Â¥1.8 billion (about US$16m) in its first grant in 15 years.

By helping Zimbabwe upgrade its infrastructure, Tokyo hopes to bring more Japanese companies to Zimbabwe at a time when China is aggressively seeking economic opportunities in Africa.

At the news conference, Mugabe invited Japanese companies to invest heavily in his country, which is rich in such minerals as gold, platinum and nickel. He said Japanese firms can take advantage of special economic zones in the country.

â€œZimbabwe doors are open to the Japanese investors and they should look forward to a mutually rewarding relationship with us,â€ said the worldâ€™s oldest head of state, who turned 92 last month.

Securing international investment is crucial for Zimbabwe, which is also suffering from drought. Its economy, which used to be an agricultural powerhouse, has suffered severely since the United States, Canada, and the European Union imposed economic sanctions following Mugabeâ€™s land reform program in 2000. After the sanctions were eased in 2014, the EU resumed direct investment in 2015 for the first time in 13 years.

But the international community remains critical of Mugabeâ€™s human rights violations and he is still banned from entering both the U.S. and EU.

Despite the international criticism, Japan invited the veteran leader because he still wields clout in Africa at a time when Japan is trying to build consensus for its plan to reform the United Nations. On Monday, the two countries agreed to cooperate on this issue and Japanâ€™s quest for a permanent seat on the Security Council.

The two leaders also pledged to hold a successful 6th Tokyo International Conference on African Development in August, when it will be hosted by Africa for the first time. Japan hosted previous five TICAD meetings.