Along Central African Republicâ€™s (CAR) eastern rivers small groups of independent miners are searching for diamonds and gold. As with many miners, they have to pay for a licence. Their licence, however, is not issued by any government. Violent armed groups control these rivers, and they are the primary beneficiaries of their hidden wealth. 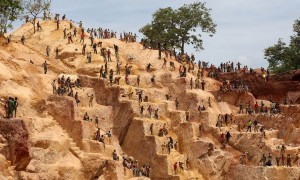 An open-pit gold mine in Central African Republic. Companies often fail to ask questions and identify warning signs in their supply chain that might warrant further investigation and action. Photograph: Reuters

They are not the only armed groups or oppressive forces benefitting from miningâ€™s bounty. The pattern is repeated in many countries stalked by conflict and instability.

There are diamonds in CAR and Zimbabwe, precious stones in Afghanistan and Myanmar. There is tungsten in Colombia and gold in Mexico and the Democratic Republic of Congo (DRC), which is also rich in tantalum, tungsten and cobalt.

These valuable resources are dug and blasted out of the ground by small groups of independent miners, or by large industrial companies, before changing hands many times on their way through supply chains that criss-cross the globe.

Ore becomes metal; metal is transformed into parts and components; these are in turn assembled into the products we use every day: our mobile phones, our cars and our computers. These tiny amounts may not sound like much, but they add up to a global trade in minerals worth billions of pounds.

If you have ever wondered how violent armed groups can afford to pay and equip their fighters, even in some of the worldâ€™s poorest countries, at least part of the answer is often found in and around these mining sites. Some armed groups seize and run mines of their own, but mining is treacherous. Many therefore prefer to extort or illegally tax independent miners, who have little choice but to brave its many hazards in search of a livelihood. Others levy tolls on key transportation routes in areas where the government offers little protection.

There are cases in which violence is aimed directly at control of natural resources. More often, however, the root cause of a conflict goes deeper. In such cases, ready access to the cash supplied by the minerals trade can still intensify violence and prolong conflict, creating economic incentives that favour continued chaos over peace.

In countries like Zimbabwe, partisan national security forces and secret police have looted diamond fields to secure a lucrative off-budget revenue stream that frees them from government budgets and the oversight these bring.

Swiss companies had been buying gold said to originate in Togo, a country that produces little or none

This illicit trade can flourish because there is an undiscerning and ready market for these resources. Global supply chains â€“ many of which lead to major markets such as the EU â€“ are highly secretive and poorly regulated. This offers those with dodgy minerals to sell plenty of weak points where their tainted goods can be mixed into legitimate supply chains.

An informal â€œdonâ€™t ask, donâ€™t tellâ€ culture still prevails within many companies and supply chains, meaning legacies of violence or conflict-finance are soon lost and forgotten, and with them, the sense of ownership and responsibility that can bring change.

What can companies do?

It doesnâ€™t have to be this way. When companies work together to make their supply chains more transparent they can ask questions and identify warning signs that might warrant further investigation and action.

Last year Berne Declaration, a Swiss NGO, reported that Swiss companies had been buying thousands of kilos of gold said to originate in Togo, a country that produces little or no gold. In reality, much of the gold reportedly originated in Burkina Faso, where gold is often mined in treacherous conditions. When such risks are identified, companies have an obligation and opportunity to use their leverage to seek answers and push for change.

Companies and consumers must not confuse this requirement to take greater care when sourcing from high-risk environments with an encouragement to move their business elsewhere. If someone breaks into your office, the responsible thing to do is to invest in some alarms, not to close the office, fire everyone, and move to a safer city. At least not until other options have been exhausted.

Legislators and some companies are beginning to take notice. The UN has made it clear that companies have a responsibility to make sure they are not financing conflict or human rights abuses, and multinational bodies such as the OECD have developed guidance to help them.

Far too few companies have responded, however, leading the US government to pass legislation requiring some US companies to exercise due diligence on key mineral supply chains. The EU is now considering legislation of its own, but risks falling behind the US with a weak and voluntary law that has been widely criticised by civil society.

When companies and governments behave responsibly, the minerals trade can bring jobs and investment. This is the great promise of international trade. In order to deliver on this promise, however, both sides of the supply chain must live up to their part of the bargain. Those enjoying the benefits at one end have a responsibility to ensure they are also being felt at the other. Ignorance is no excuse.