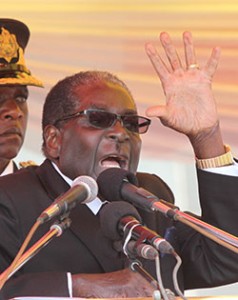 Our challenge remains on how to get rid of a dictator and transform the institutions he has built around himself which are mired in patronage and corruption, and replace him, his institutions, including the predatory coalition that has much to lose, with an inclusive democracy that begins to build new inclusive political and economic institutions.

This will not be an easy task at all.

Last week, I briefly touched on the issue of a political settlement, as a means to address political transformation in Zimbabwe. It is clear that since 1995 we have been failing to get rid of the dictator through elections, mainly because of his control of and unbridled grip on the state machinery which has become by design self-centred, partisan, cruel, brutal, corrupt and unwilling to capitulate to the popular vote.

Every progressive and sane Zimbabwean wants Mugabe to go, there is no doubt about that. The issue remains how to do that as soon as possible and as peacefully as possible because we just donâ€™t have other options.

There is also no doubt that without substantive political reforms in Zimbabwe a transformation from a dictatorship to an inclusive democracy is highly unlikely in the short to medium term. This is the reality despite the economic decline we are facing.

Our main problem, however, remains the fact that we are expecting the same dictator to implement political reforms which are most likely to result in his dismissal from power. It is therefore clear that the dictator, and the predatory coalition that has mushroomed around him, will hardly be enthusiastic to implement the very changes that will inevitably result in their demise and possible criminal prosecution. This an obvious fact and I just donâ€™t know why some of us are choosing to ignore this fact.

There have been suggestions by the likes of Wilbert Mukori and Patrick Guramatunhu that we should either have political reforms now or we should â€œforce Mugabe out.â€ My question which both must still answer is the â€œhowâ€. I will however not hold my breath. A case of â€œthe comfort of opinion without the discomfort of thought perhaps?â€ (RF Kennedy).

There is no debate that we all want political reforms before any election in Zimbabwe. We know that the MDC-T, for many reasons which include the dubious role of the mediator Thabo Mbeki, failed to achieve the objectives of the GNU. That is a historical fact that we must accept. Repeating this a thousand times, as Mukori and Guramatunhu monotonously and religiously do each week like clockwork, does not change our history nor does it provide us with the practicalities of change.

The question remains how to deal with ZANU (PF) intransigency on the issue of implementing electoral changes before the next elections. My suggestion has always been that it is now necessary that we think differently on the issue if we are to get new results. This is informed by the fact that in all instances of peaceful political change (that is besides war or violent overthrow) there inevitably ends up being some sort of political settlement or other with the incumbent.

We now need to move on and come up with a workable and practical solutions and one solution for me includes the establishment of a coalition front amongst all opposition political parties followed by a political settlement with ZANU(PF) to establish a technical authority that deals with our current economic emergency while putting into place the necessary political reforms. We should not rush to elections they are costly, decisive and may not even achieve our end goal.

Once we have achieved the above, it will be necessary to sell our position as a collective to the international community led by the United Kingdom who can act as guarantor to the process. We can then put into place some soft landing mechanism for ZANU (PF) leadership that makes it attractive for them to change.

Regardless of how painful this may sound, we cannot wish ZANU (PF) away from any new formula for change. They not only exist as a barrier to change but are so embedded in the system and unless we deal with them, we are most likely to remain locked in this unending vicious cycle of stagnation, intrigue and innuendo.

I think that waiting for 2018 on the hope that there will be some leadership changes within ZANU (PF) and that Mugabe will voluntarily relinquish power is dangerous dream.

We are in an emergency situation here in Zimbabwe as wide spread poverty and joblessness grips the country. We need an extraordinary thinking and a totally new approach.

I agree with the saying that – the best way to predict the future is to create it. The past is gone and must never determine the future.

Vince Musewe is an economist and author based in Harare. He is also Scetertary for Finance and Economic Affairs for the Peopleâ€™s Democratic Party (PDP). You may contact him on [email protected]. Please note that the views expressed in this article are his personal views.