President Mugabe, stung by the growing opposition of war veterans, complained at a rally in Bindura â€˜some of you are going as far as China telling them that we need a new leaderâ€™. 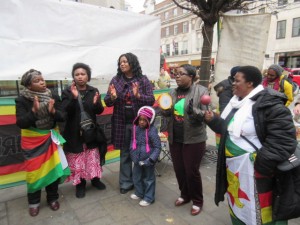 The comment is ironic given reports that the nonagenarian is soon to go on yet another jaunt to the Far East â€“ this time to Tokyo â€“ which some might think shows that Zimbabwe does not need this leader at all.

The Herald will no doubt tell us that the trip is as important as the Indian cultural festival that Mugabe used as a pretext last week to go to Singapore to see his doctors. But what credulity has the Herald? This week it splashed a story that a majority of Zimbabweans approve of Mugabeâ€™s leadership â€“ only for it to emerge a day later that the paper was repeating a two-year-old report. It was like reading thesame speech to Parliament twice. But who would possibly do that?

And anyway, what is there to keep Mugabe in Zimbabwe? Contrary to the Heraldâ€™s delayed â€˜scoopâ€™, it is clear that even the war veterans have fallen out of love with him. And it is not as ifthere is anything for him to do in Zimbabwe. All is under control. No one will starve he assured supporters at the rally.

â€˜The food is there and what is slowing distribution is the challenge we are facing in transportationâ€™, he said. â€˜To alleviate the transport problem the district development fund has adopted aâ€˜hit and runâ€™ concept and has ten trucks going around the country moving food from the grain marketing board depots to the public (see: http://www.zimbabwesituation.com/news/zimsit-m-president-reassures-nation-no-one-will-be-denied-food-the-herald/).

Ten trucks? All solved then!