MDC-T says it will do everything it can to hold a peaceful demonstration on the 7th of April to push government to improve livelihoods of Zimbabweans who are surviving on less than a dollar per day. 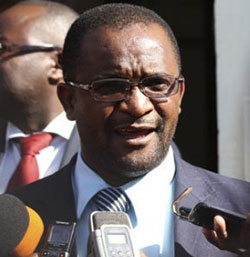 MDC-T Secretary General, Douglas Mwonzora, said this during a press conference held in Harare Monday afternoon. Mwonzoraâ€™s comments came hours after the police stormed the MDC-T headquarters in Harare claiming they were searching for party activists who allegedly assaulted their Zanu PF rivals who were passing by last weekend.

Some MDC-T officials said they saw the raid as an attempt to sabotage the planned demonstration.

â€œThe way the police searched our offices you could see that they were not searching for people but for information,â€ an MDC-T party worker said Tuesday.

But Mwonzora said they were prepared to achieve their goal even if it meant they should approach the courts.

“The police would most likely refuse us permission to hold the march but, we will seek for Courts’ intervention if denied our constitutional right to demonstrate.”

Mwonzora said the march is meant to force the government to account for the $15 billion realised from Chiadzwa diamonds which President Robert Mugabe said was missing.

During his birthday interview on Zimbabwe Television two weeks ago, Mugabe revealed that about $15 billion worth of diamonds were misappropriated but did not say what action he would take on those involved in the scandal.

â€œWe want Mugabe to tell the nation who stole the diamonds at the expense of the citizens who are living in abject poverty yet most of his ministers and their families enjoy the countryâ€™s resources.

â€œThis cannot be allowed to continue as Zimbabweans continue to suffer due to one manâ€™s selfishness and greediness,â€ said Mwonzora.

He said the MDC-T would voice its concerns until Mugabe steps down.

Most Zimbabweans barely two meals a day and some children around the country have dropped out of school due to hunger.

Recently, the World Food Programme announced that 3 million Zimbabweans were in urgent need for food.