DURBAN: Giving up on her education was never an option for Dr Moleen Zunza. 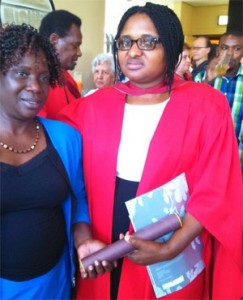 The Zimbabwean granddaughter of a traditional healer on Wednesday graduated with PhD in paediatrics and, later that day, with a BCom Honours degree from Stellenbosch University.

â€œIn our country we have a culture of finishing what you start, no matter how difficult it is. Otherwise it is seen as a sign of failure and that is how I approach life,â€ she told News24 on Thursday.

The Zimbabwean mother of two, currently living in Stellenbosch, relocated to South Africa when her husband received a post-doctoral position at Stellenbosch University in 2008.

Zunza, 37, had to leave her job as a registered nurse at the Parirenyatwa General Hospital in Harare after working there for four years.

â€œWhen we arrived, the plan was to work here as a nurse and study at the same time, but I was unable to register with the South African Nursing Council. Luckily I had applied to do my masters in clinical epidemiology and I was accepted.â€

Zunza began studying in January 2009 and, with the support of her husband and two teenagers, graduated in March 2011.

â€œMy plan was to continue with my PhD, so I started working on my proposal and registered in 2012. My research focused on the methods of infant feeding of HIV-infected women and the effects these had on the infant’s growth and mobility. I was doing my honours at the same time.â€

Between her studies and research, Zunza worked at FamCru, a unit in the department of paediatrics and child health at the universityâ€™s faculty of medicine and health.

â€œIt was a stressful journey because of financial constraints.â€

Support from her supervisors kept her going during difficult times.

â€œMy husband and my kids have been really great. I spent the last three years in a library, from January to December. I missed hearing my children playing outside while relaxing in the house.â€

Now that she had qualified, Zunza planned to work as a researcher at an academic institution and consult part time.

Growing up in Wedza, Zimbabwe, her grandmother, a traditional healer, raised her and 19 other children. She put her through primary school and her cousin paid for her high school tuition.

Zunza said she came from a broken home but she always had big dreams.

â€œAfter high school, I got a government scholarship to study nursing. My father wanted me to become a policewoman but I wanted to become a nurse because I loved the way they carried themselves and the way they looked.â€

She realised later in life that there were more career opportunities for her.

â€œI have always wanted to be an independent thinker, and I think my biggest lesson in life is that the sky is really the limit and that working hard and perseverance does really pay off.

â€œNever give up on your dreams,â€ she said.