â€œEconomic difficulties have deepened and Zimbabwe cannot wait and needs to act now. A comprehensive and ambitious economic transformation program is needed to revive the Zimbabwean economy and to cement support among international partnersâ€ These are the comments attributed to Zimbabweâ€™s IMF Country Representative Domenico Fanizza at the completion of the most recent IMF visit to the country. 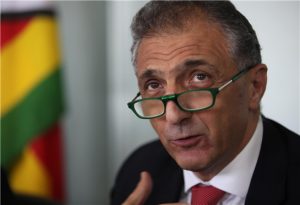 As PDP we agree with this observation that Zimbabwe needs urgent substantive action now in order to arrest the social and economic decline which is now evident everywhere. However ZANU (PF), especially President Mugabe, continue to behave as if all is well and there is no urgency to rescue Zimbabweans from their continued incompetence and misappropriation of the countryâ€™s resources.

Zimbabwe is in a man-made crisis manufactured by ZANU (PF) led by President Robert Mugabe and needs an emergency rescue package now. As PDP, we are proposing that this rescue be led by an inclusive Transitional Technical Committee which has necessary integrity and political will to turn our economy around and not the ZANU (PF) cabal who have clearly failed to revive our economy since their unrealistic and politically expedient promises of 2013 to create 2.2 million jobs.

It is our view that the reduction of government recurrent expenditure to 52% of GDP by 2019 as proposed by Finance Minister Patrick Chinamasa is not only too little too late, but is not the panacea of economic recovery.

Zimbabwe has a deep seated ethical challenge at political leadership level and no amount of money will change that fact. ZANU (PF is fundamentally flawed, fundamentally unethical and corrupt and this is not about to change.

In the highly unlikely event of the country managing to scrounge around and pay the promised US$1, 8 billion arrears to development partners by May 2016, there is no guarantee that any further funds advanced by development partners to Zimbabwe will result in any fundamental economic shift. In fact, it is our strong belied that if a ZANU (PF) led government were to access any further funding from the IMF, we are likely to see them entrench themselves and continue to behave as they have done in the past as has recently happened in Iran after the unfreezing of its resources by the United States.

In our view, Zimbabwe needs a Marshall Plan which must be an inclusive and well thought- out plan to address food security and poverty alleviation, revive agriculture in a sustainable manner, reindustrialise the country, rehabilitate our infrastructure and create jobs and sustainable incomes. In addition we need to build confidence within the international community and behave differently so that we may attract new investments. We cannot, for example, continue to seize private assets and expect to earn any respect from foreign investors.

With regard to indigenisation our position is very clear and consistent. This is an ill-conceived policy at the wrong time for the wrong reasons and there is no way that this policy can be sanitised. As PDP we continue to call for its total repeal.

Zimbabwe needs new national and local governance structures that are accountable, transparent and managed by competent team of technicians and led by principled political leaders. Only then can we begin to expect substantive change in how we allocate and manage our resources.

As PDP we continue to advocate the immediate step down of ZANU (PF) and President Mugabe so that we may save Zimbabweans from this cabal which has decimated lives and livelihoods without consequence.

A new Zimbabwe is possible!