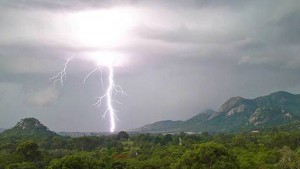 The photographer, Dr Peter Lowenstein, a retired geologist, explains:Â  â€œSixteen of these occurred in just 14 minutes around the margins of a single intense storm cell that developed over the suburbs of Chikanga, Hobhouse and Zimta Park. I have never before witnessed a thunderstorm in which almost 100% of the lightning has been cloud-to-ground discharges and pity those who were on the receiving end of the ones which landed in the densely populated areas. The two storms interrupted what has been an prolonged drought that has affected Mutare and eastern Zimbabwe for the past few months. Such intense thunderstorms are uncommon late in the rainy season and are a sign that it is a poor one.

This time-lapse is a compilation of short sequences and single frames extracted from three short videos taken using a tripod mounted Panasonic Lumix DMC-TZ10 compact camera in scenery mode. In the first section the strike sequences play back at normal speed, in the second single selected best frames are displayed for one second each and the third section is a repeat of the first.