MARONDERA: Most districts in Mashonaland East are battling with a huge number of Sexually Transmitted Infections (STIs), a recent provincial health report shows. 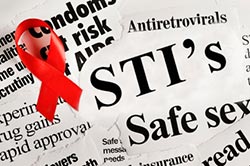 “STIs are high in Murehwa, Mudzi and Mutoko along the Nyamapanda highway.Â  This is mainly due to high prevalence of key populations, notably commercial sex workers,” the report says.

“According to the needs assessment and dialogues done in the districts, sex workers from all over the country flock at Juru Growth Point, Murewa Centre and Nyamapanda due to brisk business brought by long distance truck drivers, small scale miners popularly known as makorokoza, tobacco farmers and kombi crews.

The report said STI infections were low during the first and second quarters of the year but increased during the third and fourth quarters.

“The third quarter comes after the tobacco selling season and high prevalence of STIs and HIV are noted in areas like Macheke, Murewa, Marondera East farms and Goromonzi.

“It also emerged that STI cases are mostly prevalent at popular entertainment hotspots like Ziko, Mutangadura, Chikwanha, mining areas like Acturus and Rwenya as well as Dombotombo, Nyameni and Cherutombo suburbs in Marondera,” the report said.