EDUCATION minister, Lazarus Dokora, has introduced a new â€œpolitical indoctrinationâ€ programme in all the countryâ€™s junior and secondary schools. 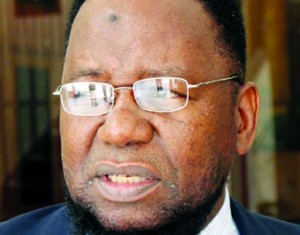 The new scheme called the â€œNational School Pledgeâ€ which was introduced last week, forces pupils to recite a 10-line poem which praises both the departed and â€œlivingâ€ national heroes.

The poem is recited after singing of the national anthem. And, when reciting the poem, both school children and their teachers are supposed to stand still and execute a military style salute.

A circular to that effect was sent to all schools throughout the country last week and it was followed by some workshops at every school.

Some of the teachers who have attended the workshops which were conducted at their respective schools by the ministry of primary and secondary education officials, said they were ordered make sure that both the teachers and the children quickly mastered the National School Pledge.

â€œThey said this national pledge should be highly prioritised and both pupils and teachers should know it by head this week,â€ said a primary teacher from Mashonaland West.

â€œAt our school, every teacher was told to start with the national pledge before starting his or her lesson, meaning to say that it should be recited eight times a day since we have eight different lessons every day,â€ a Murehwa secondary teacher told NewZimbabwe.com at the weekend.

Zanu PF has repeatedly made it clear that only their members are declared national heroes. As such, most if not all the people buried at the National Heroes Acre were ruling party members meaning the new schools order is forcing children to hero worship departed Zanu PF cadres such as former war veteransâ€™ leader Chenjerai Hunzvi.