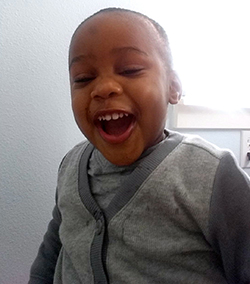 On March 25, Elijah and his family headed to Washington, D.C., where just three days later, theyâ€™ll participate in an American tradition that dates back to 1878.

The Moyos will join celebrities, musicians, politicians and the first family at the 2016 White House Easter Egg Roll on Monday.

Elijahâ€™s father, also named Elijah, entered the toddler into the lottery and was shocked when he received an email inviting the family to the White House.

More than 35,000 people will descend on the White Houseâ€™s South Lawn for what will be the final egg roll of President Barack Obamaâ€™s administration.

Idina Menzel, a Tony Award-winning actress and singer, will headline the main stage this year. Menzel is well-known as the voice of Queen Elsa in the 2013 Disney film â€œFrozen.â€ She will sing the national anthem to open the event.

Several celebrity chefs are slated to host cooking demonstrations, while casts from the talk show â€œThe Realâ€ and ABCâ€™s â€œBlack-ishâ€ will participate in events throughout the day.

The younger Elijah is excited to participate, but itâ€™s not likely the 2-year-old realizes, or will remember, just how special this invitation is, his dad said.

The family gets three tickets, so the toddlerâ€™s father and grandmother will accompany him on Monday.

Elijahâ€™s dad said he plans on taking scores of photos. He even went to a Bellevue tailor to get custom-made traditional African shirts they will wear to the event.

Though little Elijah was born here, the family is originally from Zimbabwe, his dad said. The Moyos have lived in Newcastle for a little more than a year.

â€œWe want to stand out, wear something traditional,â€ he said.

This article is taken from Newcastlenews.com.