The United Nations World Food Programme (WFP) has announced that â€“ for the first time â€“ it would not suspend relief operations to vulnerable people in Zimbabwe during the spring and summer but continue food and cash assistance throughout the year. 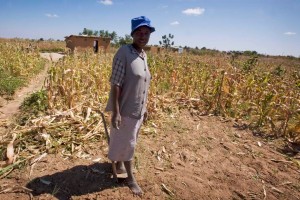 A woman stands outside her temporary home and dried up maize crop in Epworth, Harare, Zimbabwe. Photo: Kate Holt/IRIN

Typically, April begins what is considered a â€œperiod of bountyâ€ in the country following difficult pre-harvest months, usually from October to March. This year, the period has turned into a â€œtime of wantâ€ with nearly three million people going hungry, according to the WFP.

Unusually strong El NiÃ±o weather event has dried up the rains in southern Africa. This is particularly perilous as the timing coincides with the growing season when smallholder farmers depend on rain-fed agriculture.

â€œMany rural communities are in the grip of hunger and this is set to continue into next year,â€ said Eddie Rowe, WFP Country Director in Zimbabwe.

According to the latest update from the Zimbabwe Vulnerability Assessment Committee (ZimVAC), 2.8 million people â€“ more than a quarter of the rural population â€“ do not have enough to eat and have little or no guaranteed access to food.

WFP said that it will provide food and cash-based assistance to some 730,000 people this month. Operations are expected to be scaled up to reach an estimated 2.2 million people in the early months of next year, with the Government and development partners assisting the rest.

â€œWe’re working with the Government and donors to mobilize assistance to the most vulnerable but to reach all those in need we are dependent on the donor community continuing to fund our operations,â€ Mr. Rowe said.

The southern and eastern parts of the country are expected to be particularly badly hit with next month’s maize harvest predicted to be a â€œfailureâ€ by the Global Agricultural Monitoring Initiative (GEOGLAM).

In addition, thousands of cattle have died without sufficient access to water, reducing incomes for people and cutting down food supply.

Zimbabwe is now facing its worst malnutrition rates in 15 years, with nearly 33,000 children in urgent need of treatment for severe acute malnutrition, the UN Children’s Fund (UNICEF) has said.