FORMER US Ambassador to Zimbabwe Charles Ray has backed former vice president Joice Mujuru to turn around the fortunes of the stricken country, urging her to work with other opposition parties. 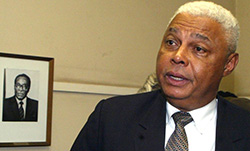 Mujuru, who was fired by President Robert Mugabe, is the interim leader of the recently formed Zimbabwe People First (ZPF) party

â€œShe is pragmatic enough to work with the MDC and has the intelligence and ability to find ways to work effectively with the international community,â€ Ambassador Ray said, responding to questions from NewZimbabwe.com.

The former envoy left Zimbabwe at the end tour in 2012. He was blocked by government from consoling the Mujuru family following the death of the ex-VPâ€™s husband, Retired General Solomon Mujuru, in a still unexplained fire in 2011.

The former vice president, while still Mugabeâ€™s deputy, was also alleged to have held â€œclandestineâ€ meetings with Ambassador Ray at undisclosed locations outside Harare.

It was claimed that Mujuru sought guarantees of financial assistance from the Americans in the event she managed to resettle power from Mugabe.

The veteran leader fired Mujuru from government and the ruling party, claiming she plotted to assassinate him.

However, Ambassador Ray denied holding clandestine meetings with Mujuru but insisted that she â€œhas the interest of the country at heartâ€.

â€œI read of her being fired; but find itâ€™s hard to believe the charges against her are true,â€ said the envoy.

â€œMy relationship with Dr. Mujuru – both professional and personal when she was vice president – was good,â€ he added.

â€œI found her to be pragmatic and I believe she sincerely had the best interests of the country at heart.â€