Matches were fixed at this year's African Nations Championship, the continent's second-biggest soccer tournament, the head of the Zimbabwe federation said on Wednesday in another major blow to the game's credibility. 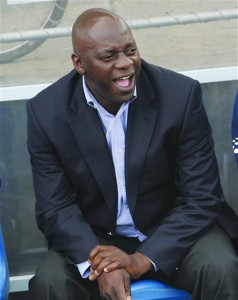 Zimbabwe Football Association President Phillip Chiyangwa said there was “overwhelming” evidence that his team’s games at the tournament were manipulated by a ring of fixers that included federation officials, coaches, players and the federation’s former chief executive.

Zimbabwe lost 1-0 to Zambia, 1-0 to Mali and drew 1-1 with Uganda at the African Nations Championship in January in Rwanda. The tournament is second only to the African Cup of Nations in terms of prestige in African soccer.

“In effect our Rwanda matches were affected by this corruption, this whole match-fixing saga,” Chiyangwa said at a news conference. “I will not leave anything to chance. I will chase them to their rat holes until such a time (as) they are brought to book.”

But internal ZIFA documents seen by The Associated Press detailed that match-fixers “within and outside” the federation targeted games in both Africa’s two biggest competitions and in the top league in South Africa, with the former head coach of the Zimbabwe national team one of the “chief suspects.”

ZIFA head Chiyangwa later confirmed some of those details.

“The evidence we have is so overwhelming,” Chiyangwa said. It indicated “serious crime in the form of organized match-fixing. It’s very worrisome,” he said.

Rushwaya had a life ban from a previous match-fixing scandal involving Zimbabwe’s national team overturned in January. The fact that serious allegations of fixing at the Zimbabwe federation should emerge again so quickly should be worrying to African and world soccer bosses, with the sport already under severe scrutiny with the FIFA corruption scandal.

Current Zimbabwe coach Callisto Pasuwa and 20-year-old national team goalkeeper Tatenda Mukuruva were the whistleblowers, according to the documents, after they reported being approached by the fixers and asked to throw games. Mukuruva said in an affidavit that former coach Gorowa and current assistant coach Dube asked him to undergo a “keeper’s course on fixing matches.”

Players were offered $5,000 each for every game fixed, ZIFA believes.

FIFA and the Confederation of African Football, the body that oversees the African Cup of Nations and African Nations Championship tournaments, had been informed, ZIFA said.

CAF released a statement earlier Wednesday confirming it would investigate the alleged attempts to fix the Zimbabwe-Swaziland Cup of Nations qualifiers, which it called “very serious.” But the continental body had not yet responded to the later statements by Chiyangwa that games at the African Nations Championship finals were fixed.

ZIFA said its evidence was in the form of emails and audio recordings, and sworn affidavits by whistleblowers. Some of it “directly” implicated executive committee member Kasinauyo in trying to fix Zimbabwe’s home and away qualifiers against Swaziland at the end of this month. If those fixes were successful, Kasinauyo would likely try and fix more international games, ZIFA said.

But ZIFA’s internal documents also revealed the larger network of alleged match-fixers, including two other unnamed ZIFA officials, an unnamed Italian national who was described as the “ringleader,” Rushwaya, the coaches Gorowa and Dube, and two Zimbabwe players.

Rushwaya was previously found guilty of fixing games involving Zimbabwe’s team on tours to Asia between 2007 and 2009. That scam was believed to be masterminded by infamous Singaporean match-fixers Wilson Raj Perumal and Dan Tan. Rushwaya only had her life ban lifted in January by ZIFA’s new leadership after it was never endorsed by FIFA.

Gorowa was fired as coach after Zimbabwe lost to Tanzania in qualifying for the 2015 African Cup of Nations. Afterward, he was accused by ZIFA of selecting questionable players that should not have been representing the country.

Games in South Africa’s Premier Soccer League were also under suspicion, according to ZIFA’s documents. They named two Zimbabweans playing in South Africa â€” goalkeeper George Chigova of Polokwane City and defender Partson Jaure of Pretoria University â€” as also implicated in fixing matches and among the “chief suspects.”